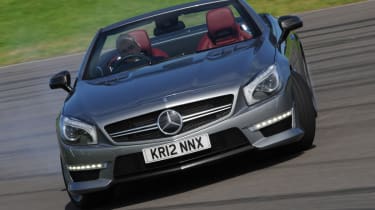 Last year, the Mercedes C63 AMG Coupe finished a shock second in our performance car contest, so expectations were high that the company’s latest SL63 AMG would do well. And it didn’t let us down in 2012.

One area of contention is still the car’s looks. It’s not exactly pretty from the front – its best angle is undoubtedly from the rear – but it’s an improvement on the old SL. The interior is beyond reproach, however, as the build quality and goodies put it on a par with the best GTs.

The 5.5-litre twin-turbo V8 under the bonnet means it has effortless cruising ability, too.

But the SL63 is more than just a boulevard cruiser. AMGs have often been all about the engine and straight-line speed, and while this SL63 still does a great job of being a dragster, it’s also very capable in corners.

Active suspension reduces body roll, while the multi-stage traction control allows a certain amount of slip, letting you make the most of the power. The other driver aids can also be adjusted to make the SL feel more nimble than a 1,845kg roadster has any right to be. Switch the traction control off and the Mercedes can be coaxed into dramatic, tyre-smoking tail slides.

The SL63 recorded a test lap of 62.9 seconds – joint second with the Lotus Exige S. As the lightweight Brit is a track-focused sports car, that’s a brilliant time.

However, all this comes at a price: our option-laden model cost £139,540 – which is only £37k less than its supercar cousin, the SLS AMG Roadster.

A monstrous power output and agile chassis meant the SL63 had no trouble setting a quick lap time. Yet you don’t have to drive flat-out to really enjoy this car. On a sunny day, you can cruise along with the top down, savouring the raucous V8 soundtrack, surprisingly supple ride and high-class cabin. So when I needed to leave the track to fetch more sarnies for the team during our time on Anglesey, it was the AMG’s keys I always reached for.