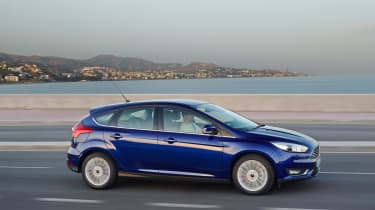 Compared to the 1.0 EcoBoost three-cylinder turbo, the ageing 1.6-litre petrol engine in the Ford Focus feels outdated and sluggish. Even the racier styling of the Zetec trim can’t divert the spotlight away from the cheaper but less efficient unit when compared to many of its rivals.

The Ford Focus was the UK’s second-best-selling car in 2014, and with a host of updates breathing new life into the family hatchback towards the end of that year, it became better than ever to drive.

However, the Focus is quite dependent on spec, and unfortunately the naturally-aspirated 1.6-litre petrol Ford Focus Zetec model isn’t one of the highlights in the Focus line-up. That’s because the older engine feels lethargic next to Ford’s own turbocharged 1.0-litre Ecoboost triple that punches hard in the mid-range and revs out with a pleasing thrum.

The four-cylinder 1.6 drones more and comes in three different specs, with either 84bhp, 104bhp or 123bhp on offer. The most powerful engine only comes with Ford’s six-speed automatic, whereas the other two get a five-speed manual – but even the higher-powered engine’s 159Nm of torque doesn’t feel like enough. 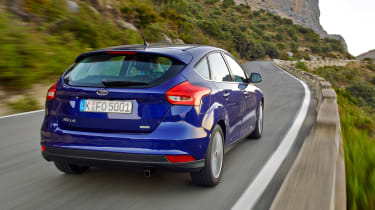 You’ll have to work the engine hard as a result, which hurts real-world efficiency. Ford claims the mid-level 104bhp 1.6 will return up to 47.9 combined with 106g/km CO2 – compare this to its stop-start equipped EcoBoost rival that boasts 61.4mpg and 105g/km CO2, and it’s obvious to see how technology has improved the Focus.

It has an ace up its sleeve too – the five-door-only Ford is still great to drive, with precise and fairly fast steering matched to a great chassis that rides well and changes direction quicker than you might expect. It’s still one of the best cars in the class to drive, and the harder you push it the more alive the Focus feels. It performs well around town and on the motorway, too, with plenty of comfort from the nicely judged suspension setup, which controls body roll well.

Zetec trim has always been one of Ford’s sportiest offerings, and with 16-inch alloy wheels, fog lights and a rear spoiler, the Focus’ sharp design is enhanced further.

Inside, you get Ford’s clever quickclear windscreen, cloth seats, front electric windows, a DAB radio, Ford SYNC, air conditioning and USB connectivity as standard – there’s not much kit on offer, but most items you’d want as a minimum feature.

There’s plenty of safety kit as standard, and Ford’s Active City Stop emergency braking function is available as an option, so the Focus can still do the family car thing well. However, with only 316 litres of luggage space, the Ford doesn’t have as big a boot as the VW Golf or SEAT Leon.