The Galaxy is not quite perfect, but it is the best people carrier currently on sale. 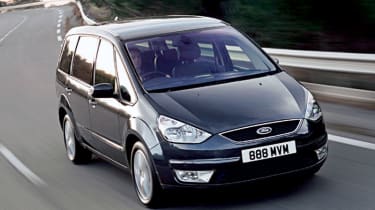 Well done Ford – the 2.0-litre petrol model is another excellent Galaxy. It offers punchy, refined performance and, in base LX trim, a good mix of kit. If you’re not a high-miler, its sub-£20,000 cost and reasonable economy make it the best-value model, too. Add in great handling, a soothing ride plus a brilliantly flexible interior, and you have a fine, class-leading package.

Buy anything bigger than a supermini these days, and chances are that the rising cost of fuel means diesel is the default choice. So when it comes to a seven-seater MPV such as Ford’s new Galaxy, surely the black pump is the way to go?

Perhaps not. We tested the entry-level oil-burning Galaxy – the £19,495 99bhp 1.8-litre TDCi LX – in Issue 914 and while its economy impressed, the engine’s lack of power made for sluggish performance. That is not a problem which afflicts the 123bhp version (driven in Issue 911), of course, but it does cost another £800.

On the other hand, for the same price as the entry-level 1.8 diesel, you can have a 143bhp 2.0 petrol model. Boasting plenty of power, it promises sprightly performance – if not quite the same fuel efficiency – and could represent the best-value Galaxy in the range. We took it for a spin to find out.

This unit is even more powerful than the range-topping 2.0 oil-burner, and while it lacks the low-down torque of its diesel brother – falling short by 130Nm with 190Nm – on the road it’s a strong performer. The 0-60mph sprint takes only 11.2 seconds, and there’s no lack of pace at higher speeds, either.

What’s more, throttle response is sharp, the engine loves to rev and it always sounds refined, even at the red line. Adding to the experience is a precise five-speed manual gearbox.

Predictably, fuel efficiency is this particular Galaxy’s weakest area. Posting 34mpg combined, the Ford is not exactly uneconomical, but when you remember the diesel versions return more than 45mpg, you will feel the pinch at the pumps – especially if you use the seven seats to the full. But then, all the oil-burners (except the slow 99bhp 1.8) cost at least £800 more, so if you’re not doing a massive mileage the petrol car still makes sense.

The 2.0’s behaviour through corners matches its performance in a straight line. With no heavyweight diesel engine up front, the Galaxy’s steering is more direct and the nose turns in more sharply. Factor in well controlled body roll plus a smooth ride, and you have a dynamic experience that’s unmatched by any MPV in the class.

As well as providing great handling, the entry-level 2.0 LX isn’t short of standard equipment, either. You may not get alloy wheels and rear electric windows, but essentials such as air-conditioning, a heated front windscreen plus curtain airbags are all included as standard.

Ford’s brilliantly simple seven-seater layout allows all of the rear chairs to fold quickly and easily with two pulls of a lever. Unlike its predecessor, there’s no struggling to remove heavy seats, and because both rear rows slide back and forth, all occupants have plenty of space. The Galaxy is not quite perfect – sliding rear side doors would make access to the back a lot easier, as would a split tailgate – but it is the best people carrier currently on sale. And with this petrol engine, it also proves that diesel need not be the only sensible choice for MPV buyers.