After 12 years sterling service the original Ka has finally been replaced. Based on the Fiat 500, the newcomer has a tough act to follow. 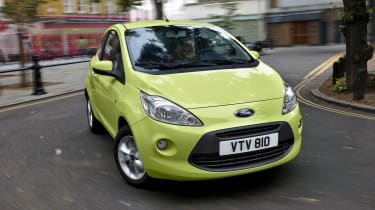 Styling/Image When it was unveiled in 1996, the original Ka redefined the style standard for city cars. Unfortunately, the second-generation car can’t match the visual impact of its predecessor. As a result of being based on the same platform as the Fiat 500, the Ford’s exterior design is compromised. It looks particularly ungainly from the rear, where it appears too tall and narrow. There are four models available, including Studio, Style and Style+. At the top of the range is the Zetec, which is distinguished by standard alloy wheels and front fog lamps.

Interior/practicality Given its diminutive exterior dimensions, the Ka has a surprisingly practical cabin. There’s decent space front and rear, and a useful 224-litre boot – extending to 747-litres with the rear bench folded flat. The Ford’s Italian connection is obvious from behind the wheel, as it uses the same dashboard architecture and switchgear as the 500 and Panda. All models get a six speaker stereo with aux-in connection, while Style trim adds electric windows and central locking. Air-con is standard on Style+ and Zetec versions.

Engines/Performance For the first time ever buyers can specify their Ka with a diesel engine. The torquey 74bhp 1.3-litre unit serves-up decent refinement and mid-range pace, and should also return nearly 70mpg at the pumps. However, we’d plump for the excellent 68bhp 1.2-litre petrol powerplant instead. It lacks the muscle of the oil-burner, but its smooth and eager delivery suits the small Ford’s character. Both engines are mated to a standard manual five-speed gearbox that’s linked to a stubby and slick-shifting centre console-mounted lever.

Driving experience The first generation Ka was famed for its agile and entertaining chassis. Unfortunately, the new model struggles to live up to the legacy of its illustrious ancestor. However, the blue oval’s engineers have tweaked the suspension and steering, making the driving experience more involving than Fiat 500. Compared the Italian car, the Ford has more accurate steering and stronger body control, while the ride has greater composure over big bumps.

Ownership costs Up against most of its city car rivals, the Ka looks a little expensive on paper. Going some way to offsetting this premium is the lengthy list of standard kit on all but the entry level Studio model. The residuals are decent too, ranging between 42 and 45 percent. Ford’s extensive dealer network should also help to keep servicing costs down. All models emit less than 120g/km, meaning an annual road tax bill of £35.

Safety/Environment With a disappointing four star EuroNCAP rating, the Ford actually achieved a lower score than the older Fiat 500. Only driver and passenger airbags are standard – you’ll pay extra for side and curtain items. You’ll also have to dig a little deeper in your pocket if you want ESP. There’s better news on the environmental front, where sub 120g/km CO2 emissions result in a low VED Band B tax slot.