If you want a sporty looking Ka, the Zetec will do the job. It’s better to drive than the Fiat 500 it shares its platform with, but it’s only available with the same 1.2-litre engine that’s present across the range. The Ka Zetec is also expensive and not as well equipped when compared with newer rivals.

There’s a variety of quirky and eye-catching trims offered on the Ford Ka city car but if you’re looking to add some sporting zest the Zetec will be the model of choice. It sits at the upper end of the range and is distinguished by a selection of interior and exterior design tweaks.

However, like every other Ka in the range, the Zetec is only offered with the 1.2-litre four-cylinder petrol engine. It develops 68bhp, which is on par with rivals such as the VW Up! and Hyundai i10, but economy of 57.7mpg and emissions of 115g/km doesn’t quite match these competitors. 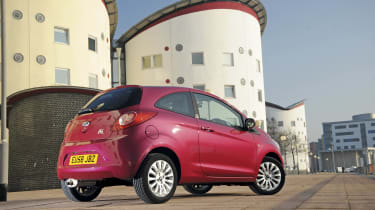 Elsewhere inside, the Ka is beginning to shows its age. Hyundai has shown with the i10 that cheap cars don’t have to look low-rent and Ford’s offering lets itself down in some areas by comparison. Hard and scratchy plastics cover most of the cabin and the CD/radio player looks dated.

The boot is larger than that of a Fiat 500 at 224 litres and the space increases to 747 litres when the rear seats are folded flat. Yet, you get more rear passenger space in a Skoda Citigo. 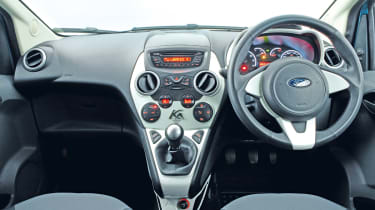 On the move, things begin to improve. The Ford Ka is able to hold its own on the motorway and thanks to small tweaks on the suspension and steering, the Ka is better to drive than the Fiat 500 that shares the same platform. The Ford offers more direct responses to any input from the driver. Changes of direction come with less body roll and the steering is more accurate too.

The chassis has been lifted from the Fiat 500 but Ford has sprinkled some dynamic magic over it to instill it with stable and direct handling. It’s worth remembering that the Ford Ka will never be as much fun to drive as its older brother the Fiesta, but the Ka is still admirable city runabout.

At motorway speeds, the Ford Ka Zetec lacks refinement, but it’s still very comfortable for a small car. It’s a shame that its engine doesn’t have the power and enthusiasm to make it really entertaining on the road and let it live up to the sporty Zetec trim.