Ford’s baby has a fresh face, but is it still great as before? 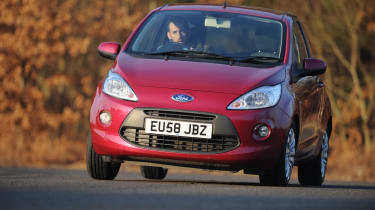 With 500,000 sold in the UK alone, the first Ka certainly made life difficult for its predecessor, but the latest model has come up trumps. It isn’t quite as go-kart-like as the old car, but the ride and handling is sublime by any standards. It’s also safer, more spacious and better kitted-out than before, with lower emissions and better fuel economy. A truly excellent supermini package.

Nearly 13 years after the brilliant original hit production lines, the revised Ford Ka is finally here – and it’s no disappointment!

But those expecting a scaled-down version of the new Fiesta should think again. The Ka is heavily based on the Fiat 500 and Panda and shares its underpinnings and engine with them, so unlike its slightly larger brother, it’s not Ford through and through.

That’s no bad thing, though, as both the 500 and the Panda have been thoroughly successful for Fiat and are great to drive – and the Ka is no exception. The controls are light and smooth, which make it ideal for negotiating its natural urban habitat.

But the previous Ka was always renowned for its taught chassis and polished handling, which Ford has strived to recreate as well as improving safety, space and materials – no mean feat.

To keep the driving experience up to scratch, Ford developed a new rear anti-roll bar to up rigidity at the back by 70 per cent.

Blue Oval boffins have also fettled with the front suspension, giving the car a more robust and rigid front axle thanks to a new set of dampers and revised springs.

Point the Ka in the direction of some twisty roads and the improvements are more than obvious. The little Ford feels much more engaging than its Italian siblings and the handling is pliant and easy to exploit.

Add to that uprated electric power steering with extra weight and feel and the Ka makes for a brilliant, tidy drive. However, the overall package isn’t quite as raw and chuckable as the old Ka, but that’s to be expected with all the extra bulk and equipment that come with a new model.

Engine-wise, the 1.2-litre petrol powerplant is far from the fastest unit available, but it’s perfect for a nippy little city car. Floor it and the Ka leaps forward with instant response and it’s more than happy to rev.

Excellent driving experience it may be, but the new Ka is far more than that. Fresh ‘kinetic’ styling has kept it up to date with the remainder of Ford’s range. The nose is heavily reminiscent of the Fiesta, while the rear, though redesigned, has clung to the looks of the previous Ka, with its curvy screen and high-set rear bumper.

Inside, the cabin has been carved out with more room for passengers front and rear and the old teardrop dash dropped in favour of a large, white centre console with well laid out controls.

The handling might not be quite as scalpel-sharp as the last model, but the latest Ka easily outshines many a modern supermini in just about every way.

Rival: Renault Twingo The Twingo has its merits but it isn’t nearly as accomplished as the Ka. It’s easy to drive and the cute styling makes it stand out from the crowd, but the standard chassis suffers from far too much body roll and it’s nowhere near as refined as the Ford.