Is the diesel version of Ford's baby as big a hit as the petrol? 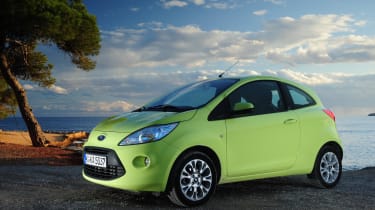 The original Ford Ka is a tough act to follow but with the new car we think the Blue Oval has another winner on its hands. By using an excellent city car like the Fiat 500 as a basis and sprinkling some Ford magic over the chassis and styling, the new ka is sure to be a hit. Bigger, safer, and smarter than the old car it’s more comfortable and yet crucially it retains a little of the fun factor that made the old car so popular. It’s easy to drive, affordable and looks good – in short it’s all a good city car should be while the addition of a diesel engine to the line up means there’s more choice than ever.

With its cheeky looks and fun handling the original Ford Ka has been the favourite small car of a whole generation of drivers. And as we found in our exclusive drive of the 1.2-litre petrol last week (Issue 1036) the all-new model looks set to continue the success story.

This time around, the Ka has another string to its bow – it's available with a diesel. The 1.3-litre unit is the same as the unit which is fitted to its sister car, the Fiat 500, and on the road its 74bhp output means the little oil burner delivers punchier acceleration than 1.2-litre petrol versions.

It’s also smooth enough around town to compliment the light controls. Only available in top spec Zetec trim the diesel commands a £700 premium over the equivalent petrol so it’s the only Ka to break the £10,000 barrier.

Nevertheless, emissions drop to 112g/km, while claimed economy is an impressive 67.3mpg. While diesels currently account for just four per cent of the UK city car market, CO2-based taxation means their popularity is sure to grow. And with Ford expecting 40 per cent of Ka sales to be Zetec models the little diesel should be a big seller.

But what about the handling? The Ka has always been compared to a go kart, and maintaining a hint of this while improving safety, increasing space and modernising the interior was always going to be a tough job.

Profit margins have never been tighter for small cars, which was the reason Ford had to co-develop the new Ka with Fiat and use the underpinnings of the 500 as its base. Thankfully, while the Ka retains the Fiat’s easy going nature it has an added edge of driver involvement. Ford’s chassis engineers have used a unique rear anti-roll bar, which increases back axle stiffness by 70 per cent.

With new bushes the front axle has been tightened too and with the help of retuned dampers this has allowed Ford to soften the springs by 30 per cent. And the end result is less body roll, a better ride and far more engaging handling. The electric power steering has been reworked too and it’s sharper, better weighted and more communicative than the 500’s.

Add this to the smart styling and the practical Fiat-based cabin and the new Ka is simply one of the best city cars money can buy.

Read about our drive in the petrol Ka here.