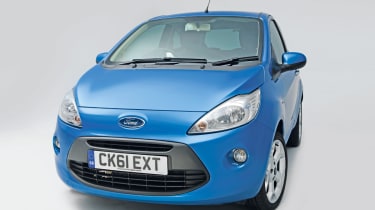 If you’re looking for a small, relatively inexpensive city car with decent equipment, then the Ford Ka Edge makes some sense. However, it’s massively outclassed by the equivalent Volkswagen up! and, like the rest of the Ka range, is lacking in standard safety equipment.

The Ford Ka Edge (not pictured) is the mid-spec model in the Ford Ka line-up, which sits above the entry-level Studio and Studio Connect models, but below the higher-end Zetec trim.

Like the rest of the cars in the range, the Ka Edge is only available as a three-door. There’s only one engine available across the range too - a 68bhp 1.2-litre petrol unit that returns 57.7mpg with emissions of 115g/km. That’s pretty ordinary when compared to the greenest city cars on today’s market.

Ford gives the Ka Edge more kit than the Studio and Studio Connect cars, which boast an MP3 ready radio/CD and an ashtray as their most exciting features. While it doesn't have alloy wheels, the Ka Edge does get some decent features such as electric front windows, remote central locking and manual air-conditioning. Its asking price of just under £10,000 is also relatively attractive.

Like the rest of the Ford Ka range, the Edge model's interior is a simple affair. While it's well thought out, it's a shame that some of the scratchy plastics and slightly naff radio from the Fiat 500 is carried over.

In short then, the Volkswagen up!, and its sister cars, the Skoda Citigo and SEAT Mii comfortably out-class the Ka in the cabin department.

In terms of driving, the Ford Ka is fine. Thanks to small tweaks to the suspension and steering, it's better to drive than the Fiat 500 and is more than able to hold its own on the motorway. It is, however, a shame that the Ford Ka's driving position isn't great, and rather frustratingly, the steering wheel can't be adjusted for reach.

The most disappointing aspect of the Ford Ka is its safety features, or rather the lack thereof. It only has two airbags as standard, and as such, received a disappointing four stars in the Euro NCAP crash safety tests. Those wanting extra airbags and stability control will need to specify them as an option.