We try the updated 2.0-litre TDCi diesel engine in a 4WD Ford Kuga 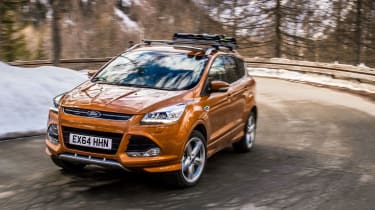 The power upgrade for this  top-of-the-range all-wheel- drive diesel, as well as the  new spec, push the Ford Kuga into BMW X3 xDrive territory. But  it’s stylish and comes loaded  with equipment as standard,  plus is a well packaged all-rounder. Although it lacks  the premium appeal that its  price warrants, you won’t  feel short changed if this  Ford is your SUV of choice.

Before Ford introduces the new flagship Edge SUV in Europe, the brand has spruced up the Kuga with a range of efficiency and power upgrades.

Here, we drive the new range-topping 178bhp 2.0-litre turbodiesel Ford Kuga, which has benefited from a 10 per cent power boost and a 14g/km cut in CO2 emissions over the previous 2.0 TDCi. An additional 60Nm of torque provides further in-gear urgency and takes the peak figure up to 400Nm, which is distributed via Ford’s intelligent all-wheel-drive system.

In a car weighing nearly 1.7 tonnes, a marginal increase in power is difficult to pinpoint. It’s faster than before, but not by much – the 0-62mph sprint time of 9.2 seconds represents an improvement of seven-tenths. 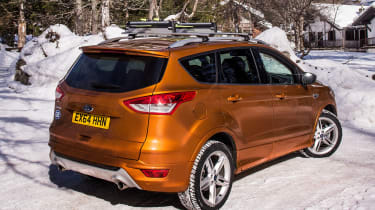 Still, the engine pulls strongly throughout the rev range and remains muted. There’s a slight whistle from the A-pillar at motorway speeds, although it’s still as calm and composed as before. And while the steering is accurate, we found it elastic, plus it self-centres a bit quickly.

Driving through the snowy French Alps, we had the opportunity to put the AWD system through its paces. On a normal run, the Kuga is mostly front-wheel drive, but in more challenging conditions, power can be seamlessly sent to the rear axle and directed further to a particular wheel to maximise traction.

This Titanium X Sport version costs an eye-watering £32,045, but as the trim was introduced due to customer demand, it’ll likely prove a hot seller. 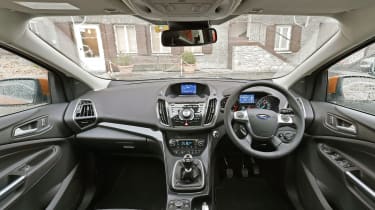