Second report: Our very own Mondeo man has seen the light on a true all-round star 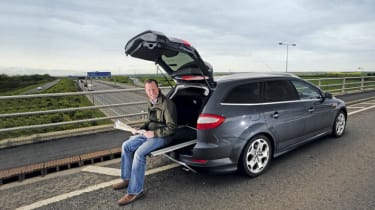 My name is Dan Strong, and I drive a Ford Mondeo… That statement doesn’t sound too taxing, but it’s not one that trips off the tongue as easily as you might expect.

In fact, it’s taken me some time to get it out in one go. When the Mondeo arrived, I would qualify this immediately. “It’s got a great chassis, you know,” I might add, before describing at length its dizzying equipment list. But now, I’ve learned that my Mondeo is much more than simply a collection of parts.

Getting under the car’s skin hasn’t been easy. I’ve spent six months in the equivalent of a self-help group of one. My special “behind the wheel” counselling sessions have mostly been held at 70mph on the A1(M) between Hertfordshire and London.

Wind, rain, sun or snow, I’ve piled on nearly 7,000miles at a steady 40mpg mulling the wisdom of choosing the Ford estate. Finally, I reached a kind of blue oval enlightenment. The Mondeo isn’t just a car, it’s a social statement, an institution – a car club, if you like – all rolled into one. Regardless of the flash ‘Kinetic Design’ looks, I am still, at the end of the day, a Mondeo man.

I don’t want to get too philosophical, but think about it: When was the last time you saw someone driving a new Mondeo like an idiot? They are as familiar and reassuring a sight on UK motorways as sodium lights and Armco barriers. Take all the Mondeos away and, somehow, everything would look uncomfortably unfamiliar.

Not that I realised this the first time I got behind the wheel. In December last year, the car was just transport, replacing a Ford S-MAX as a practical addition to a growing family. To be honest, the S-MAX is the better all-round family choice – but it’s not quite the effortless mile-muncher the Mondeo is.

With its sleeker lines and long gearing, it scythes through the air with the grace of an ocean-going cruise liner. The cabin is very comfortable, and the fuel economy great – particularly considering the performance of the 2.2-litre TDCi engine.

But despite my new-found love of a model that – until its latest reinvention – could have been described as Britain’s most boring car, there could be trouble ahead. With a holiday in Scotland at the end of the month, the relationship could yet be spoiled. Will I still be as proud to say: “My name is Dan Strong, and I drive a Ford Mondeo,” after another 1,300 miles? I’ll let you know when I return.

I understand why Dan has been so impressed by his Mondeo – it is a great all-rounder. And for my money, the Estate is even more attractive than the regular hatchback too, especially in flagship Titanium Sport X trim. However, it doesn’t come cheap. Ford has put its prices up twice since we took delivery of our car, and it’s risen from £26,700 to a hefty £28,245.