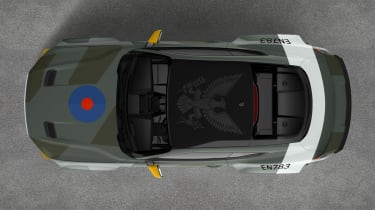 This is the Eagle Squadron Ford Mustang - a unique model that pays tribute to American fighter pilots who served in the RAF during World War II.

The car is the work of both Ford Performance and world drifting champion Vaughn Gittin Jr’s RTR Vehicles tuning company. Starting life as a standard Ford Mustang GT, the Eagle Squadron gains a wide-body kit that’s crafted from carbon fibre. It’s finished off with a striking paint finish, which bears the serial number EN 783: a designation applied to a Spitfire piloted by, among others, the US Airforce 334th Fighter Squadron during the war.

Under the bonnet, the Mustang’s 5.0-litre V8 gains a supercharger, which helps to lift output from the standard car’s 444bhp up to 700bhp. The power is kept in check by RTR’s ‘Tactical Performance’ adjustable suspension pack.

The car will make its world debut at this year’s Goodwood Festival of Speed. It’ll be shown to the public for the first time on Thursday 12 July, when Gittin will take it up the Duke of Richmond’s 1.16-mile long driveway. Festival goers will be able to view the car as a static display for the rest of the weekend.

The Eagle Squadron’s Goodwood debut is appropriate: many US Airforce squadrons were based at RAF Westhampnett - a war time airfield that today sits within the grounds of the Goodwood Motor Circuit.

After Goodwood, the Eagle Squadron will be taken to the Experimental Aircraft Association’s AirVenture event in Oshkosh, Wisconsin, where the car will be sold at a charity auction.

Click here for our 2018 Goodwood Festival of Speed preview...