Iconic Ford Mustang gets fresh design, new fuel-efficient engines and it's coming to the UK in 2015 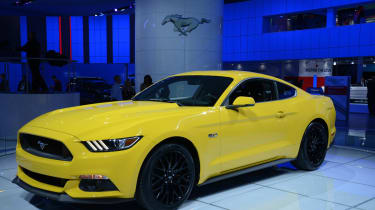 After fifty years of continuous production and more than nine million cars sold, the Ford Mustang is coming to the UK.

The all-new sixth-generation model, revealed here in our own studio pictures, had made its debut at its home motor show in Detroit, before going on sale in the UK in right-hand drive from early 2015.

There's no official word on the Mustang price yet, but expect the four-cylinder EcoBoost model to start from around £30,000, with the V8 model costing £5,000 more.

Mark Fields, Ford’s COO, calls the Mustang the “emotional connection with the Ford brand,” and has tasked it with raising the perception of the company in Europe. He also wants it to be seen as “a credible sports car in Europe”, and engineers freely admit its been benchmarked against the likes of the BMW M3 Coupe and even the Porsche 911.

And this time around it might have a fighting chance, thanks to some major revisions to the chassis. Gone is the current car’s live rear axle, replaced with more sophisticated fully independent multi-link suspension – which should make the Mustang feel more planted while improving the ride quality, too.

The Mustang has always been synonymous with a V8 engine, and for nostalgic customers a 5.0-litre V8 range-topper will be offered with 420bhp and 529Nm of torque. However, it’s a brand-new 304bhp 2.3-litre turbocharged EcoBoost engine that will make up the overwhelming majority of sales in Europe.

Economy figures are yet to be released, but fuel economy is expected to better the old 3.7-litre V6 by around 10 per cent. Two reengineered six-speed gearboxes will be offered – a manual and an automatic with paddle-shifters as standard.

A Mustang Convertible will be launched simultaneously with the Fastback coupe. It features a fabric roof the folds flush with the boot lid in just seven seconds, thanks to an electric mechanism instead of the old hydraulic system. Boot space suffers slightly, dropping from 383-litres in the coupe to 324-litres – 56-litres less than the Audi A5 cabriolet.

Despite global aspirations, the new Mustang has been designed at Ford’s headquarters in Dearborn Michigan, just down the road from where it will be built. It hasn’t strayed too far from its predecessor’s dimensions either, measuring in at the same length with the exact same wheelbase - but according to Ford it’s a ‘clean sheet’ design.

The roof is 38mm lower, the bonnet 32mm lower and the boot deck 70mm lower. It’s also 40mm wider, with wider front and rear tracks, while the A-Pillar has shifted backwards by 30mm. The result is a significantly more dynamic stance, with a drawn in waistline that expands into muscular, flared wheelarches. Side sills, optional 20-inch wheels (19s are standard) and a new take on the blacked-out rear section and three-stripe taillights add up to a more three-dimensional shape overall.

It’s the front end that grabs you attention first though with slimmer, menacing headlights either side of a wider ‘shark-bite’ grille. Moray Callum, design director for Ford North America sums it up perfectly: “There needs to be a lack of subtlety to the Mustang’s front end – like a fist flying through the air.”

The interior on the other hand looks to the aeronautical industry for its inspiration. A row of fighter-jet style toggle switches along the bottom of the centre console allow you to adjust functions such as the steering weight and ESC, while the speedometer reads “Ground Speed”, instead of simply mph.

Stitched leather on the seats and instrument binnacle, plus a slab of aluminium on the centre console shows extra attention has been paid to material quality, to satisfy more discerning European buyers, although cheaper plastics can still be found, especially around the handbrake.

No exact figures are available yet, but Ford claims there’s more shoulder, hip and knee room for front and rear passengers – thanks in part to a slimmer glovebox with the airbag integrated into its lid.

An array of new technology has been added in too, including launch control (standard on V8 models), push-button start and three selectable driving modes that tweak the steering, ESC and engine calibration all feature, while a Track Apps function lets you record your own 0-62mph and track times directly through the onboard computer.

Ford Mustang… the story so far

Ahead of the official reveal of the Ford Mustang, pictures of the new car leaked from an American magazine.

Scanned and posted to an online Ford Mustang forum, the images revealed the narrow headlights and a bold grille, both of which take inspiration from Ford’s Evos concept. Profile shots revealed the Mustang retains its sporty profile and muscular rear wheelarches, while at the back the taillights take the triple-split theme to the next level.

The grainy shots of the interior don’t reveal too much, other than the deep steering wheel of the current car will be carried over and there will be a touchscreen infotainment system offered. The material quality in the current car is pretty woeful so Ford will be hoping to improve in that respect.

This Mustang is the first that’ll be sold across the globe, as part of the OneFord strategy. It brings greater consistency across Ford’s global product line-up so that the Kuga and US-market Escape are now the same model and from September 2014 the Mondeo and US-market Fusion will be the same.

Some recent spy shots and our artist's impression in the gallery also gave us a good idea how the car would look ahead of the reveal.

An insider told Auto Express: “The design studios in Europe and Australia are working on it, as well as those in America. It will be smaller and closer in spirit to the original 1964 Mustang.”