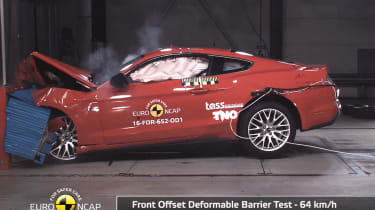 The Lancia Ypsilon was the last car to receive just two stars, while the most recent mainstream offering was the Jeep Compass, which fared equally poorly in 2012.

While the Mustang gets a 72 per cent rating for adult occupant protection  - not particularly impressive by current standards – the real cause for concern regards crash protection for child occupants, plus the muscle car’s lack of safety equipment.

According to Euro NCAP, the Mustang has been designed to score well in US-based safety tests, but when subjected to European standards the car’s specification and build fails to stack up.

That’s because the car has only received minor updates to meet European pedestrian safety standards, and the Forward Collision Warning System offered as standard on the US spec Mustang has been removed for the European market, resulting in a score of just 16 per cent in the Safety Assist category.

• Euro NCAP: Everything you need to know about Europe's crash tests

Euro NCAP’s Secretary General, Michiel van Ratingen, said: “Ford did not expect Euro NCAP to test the Mustang and chose not to fit safety technology in Europe which is available to its American consumers, and available on several other sports cars for that matter.”

Early next year a facelifted Ford Mustang will go on sale in the UK with safety assists such as pre-collision assist and lane keep assist as standard, which should fare better than the current model once it also undergoes Euro NCAP tests.

Would a two star Euro NCAP rating be enough to put you off the Ford Mustang? Let us know in the comments.