It's Ford's third people carrier to enter the MPV market, but will the new S-MAX prove to be a MAX-nificent drive? 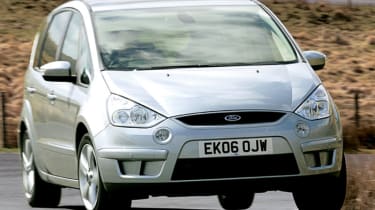 With the new S-MAX, Ford has a car that fits cleverly between a com- pact MPV and a traditional full-size model. Its interior offers enough room for seven, while the seat layout is easy to use and intelligently thought out. The cabin quality impresses too, but it's the ride, handling and comfort which really stand out.

Ford may have been late to cash in on the MPV craze, but boy is it making up for lost time! The arrival of the S-MAX - driven here in UK spec for the first time - means the firm now has three different people carriers.

Designed to offer a sportier, more driver-focused package than the full-sized Galaxy, which is based on the next Mondeo, the S-MAX also shares the new family car's chassis. It sits above the five-seat C-MAX, and will rival the likes of Renault's seven-seat Grand Scenic.

The S-MAX is 69mm lower and more than 50mm shorter than the Galaxy. There's less of a rear overhang, too, giving it a sportier profile. Yet despite the smaller frame, it still has a cavernous interior capable of carrying seven.

The cabin features the same Fold Flat System (FFS) as the Galaxy, and as the name suggests, it gives you the ability to create a very usable load area without having to lift out heavy seats. Aimed at those who need more room than the five-seat C-MAX provides, the S-MAX's interior certainly has plenty of space. Each of the centre chairs slides back and forth, and folds flat individually, while the outer ones tilt forward to give good access to the rear pair.

With plenty of headroom and a flat floor, the three middle seats offer class- leading space, and even when pushed fully back, legroom for third-row occupants is better than in a Vauxhall Zafira or Toyota Corolla Verso.

The Galaxy will have more space in the rearmost row, but the S-MAX has enough to carry seven in reasonable comfort. And while the back pair fold on to rather than into the boot floor, lug- gage space in five-seat mode is good.

Apart from fiddly backs on the rear chairs, which form the boot floor when folded, all the seat operations are easy to perform and the mechanisms robust. This air of quality continues throughout the impressively finished cabin.

Chrome-effect trim brightens the layout, while the driving position is lower and more car-like than in the Galaxy. Thanks to the large glass area and unobtrusive A-pillars, the S-MAX also offers superb visibility.

Where the Ford really excels, though, is in the field of dynamics. There's an impressive amount of feel through the steering and the turn-in is positive and sharp. Body roll is minimal, and the suspension strikes a superb balance between ride and body control. It may be a big car, but it shares the driving involvement of its little brother, the C-MAX. Add in the fact that the 2.0-litre TDCi diesel offers good performance and class-leading refinement, and the S-MAX makes a strong case for itself. Ford will be hoping that when it comes to MPVs, three isn't a crowd.