Sporty seven-seater gets a raft of updates for 2010, including all-new EcoBoost turbo engine. 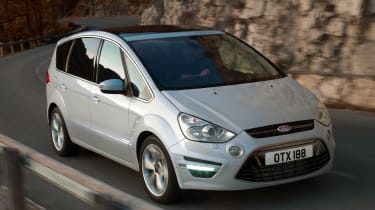 Minimal changes to the chassis, interior and exterior of the 2010 S-Max means the focus is firmly on the debut of Ford’s new EcoBoost engine. It bridges the gap neatly between similarly-powered, but more thirsty naturally-aspirated petrol engines and torque-laden diesels, providing plenty of flexibility around town and a smooth, rev-hungry responses when the pace quickens. An EcoBoost S-Max will be a rare sight on UK roads – diesel engines simply suit this car better – but Ford’s achievement in upping power and efficiency at the same time and by such significant margins shouldn’t be overlooked.

The S-Max is leading the way once again! Famous for creating the sporty MPV segment when it launched back in 2006, the seven-seater has received a host of visual and mechanical upgrades for 2010, including the first instalment of a powerful but efficient EcoBoost engine. We drove it to find out whether four years after its initial launch it’s still good enough to compete for class honours.

The new EcoBoost family is a series of turbocharged petrol engines designed to produce all the performance and driving pleasure of larger units, but with a boost in both efficiency and bhp. For example, the 200bhp 2.0-litre turbo engine making its debut on the 2010 S-Max produces 19 per cent less CO2, but 25 per cent more power than the old 2.3-litre naturally aspirated unit it effectively replaces.

So how are such huge gains possible? A combination of high presure direct fuel injection, smaller capacity and therefore a lighter weight engine and the first ever use of a twin-clutch automatic gearbox on a large MPV, mean that Ford has been able to squeeze out every last mpg. But thankfully the fun factor has stayed put.

From low rpm the EcoBoost picks up quickly, offering the flexibility of a diesel around town but with the added refinement a petrol engine brings. Keep your right foot pinned and it revs freely to the 7,000rpm red line, accompanied by a pleasing crescendo from the exhausts. While it never feels genuinely fast, there’s more than enough performance available to keep the average family driver entertained.

Ford’s new six-speed PowerShift dual-clutch gearbox, which comes as standard with the EcoBoost engine, distributes the power beautifully, too. Whether in normal mode or the more urgent sport setting it’s quick to shuffle into a higher ratio on light throttle loads and swaps down several cogs instantly when you decide to push on. It’s just a shame that wheel-mounted paddles aren’t an option as they could potentially be the clincher for driving enthusiasts looking at larger cars.

Elsewhere the S-Max is as good to drive as ever, with a solid, positive feel to all the major controls, and a supple ride that belies its talents in the corners – especially for a car this size.

Styling changes are kept to a minimum – presumably because the S-Max still looks so fresh even after four years in the showroom. A more strongly sculpted bonnet, bolder trapezoid grille and redesigned front bumper with LED daytime running lights on higher-spec models make up the modifications at the front. While a chrome strip surrounding the side glass area, LED taillights and a new S-Max logo embossed on the boot lid complete the changes.

It’s a similar story on the inside too, where besides the three-row fold-flat seat system coming as standard, a new one-piece panoramic roof being added to the options list and a the offer of a superb new premium stereo, it’s familiar territory. But that’s no bad thing – the S-Max still retains a premium feel above its price tag, especially in our high-spec Titanium test car.

If oil-burners are more your thing there’s a superb range of diesels to choose from too - including an improved 2.0 TDCi unit available in 160bhp tune for the first time. Despite it green credentials and impressive performance the EcoBoost engine will be a niche choice in the UK – diesels make up over 90 per cent of S-Max sales to date. But a 1.6-litre EcoBoost will debut later in the year on the new Focus and C-Max – models where this breakthrough engine technology will get the appreciation it deserves.

Rival: Peugeot 5008 It might not have the sporty credentials of the S-Max, but Peugeot’s recently-released 5008 is surprisingly entertaining to drive. With space for seven, restrained good looks and bags of praticality, the 5008 might be a latecomer to the MPV party, but it’s an impressive one nonetheless.