Our motoring editor’s been in a bit of a sweat – and it’s all down to the ‘greenhouse effect’ of his S-Max cabin! 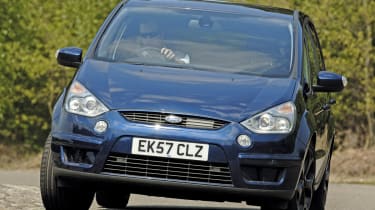 Pass the water and open the windows! Summer arrived with a superheated blast of unbroken sunshine last week, which revealed a new side to the S-MAX’s character I hadn’t quite expected.

With its big windows, glass roof and large windscreen, the Ford was always going to be something of a sun trap. But even I was surprised by how hot the interior got on a recent cross-country journey.

Part of the issue is that the glass roof panel seems to trap and store the sun’s heat more effectively than a standard metal top.

Even with the air-con set low, I felt I was fighting a losing battle as the cabin temperature crept up. To keep it in check, I ended up running the fans at full chat. Further relief came from the climate seats, which can heat up in cold weather, but have a cool setting for when the temperature climbs.

However, the best solution to control the heat without wrecking fuel economy or having to suffer the roaring air-con system is to pull the interior blinds closed.

They’re fitted to the roof and rear passenger doors, and really do cut down the light allowed in and reduce the temperature. If you regularly travel with kids in the back – as I do – the blinds also help to keep the sun off delicate skin.

However, there are also some positives to take from the recent spell of good weather, as it’s allowed me to get out and about and make the most of the S-MAX’s chassis. On a recent visit to one of Auto Express’s favourite test tracks, I finally got to push the car’s handling to the limit! There’s no doubt the big Ford is great fun to drive. The steering is accurate, and the suspension is composed even under the most extreme conditions. Body control is first-rate, and there’s remarkably little roll.

The brakes are powerful, too, but the very best bit is the neutral balance offered through sweeping bends, which allows the driver to carry a surprising amount of speed.

It’s good to know the S-MAX has such impressive grip in reserve. Yet at a more sedate pace on open roads, I noticed a slight hesitancy from the 2.0-litre TDCi engine that is most evident on a constant throttle.

Though not a fault, I wonder if it points to something more serious. It feels like fuel starvation, but I am beginning to question whether the UK’s recent swap to a 2.5 per cent biofuel mix in all diesel pumps might have something to do with it.

Ford’s boffins have offered to help me get to the bottom of the problem, but i’d love to hear if any of you have experienced something similar with your diesel engines. Feel free to e-mail me at motoring.editor@autoexpress.co.uk with your thoughts.