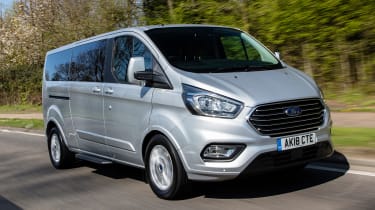 The Ford Tourneo Custom, the passenger carrying variant of the Transit Custom, is being updated in 2019 with 48-volt hybrid power, as well as a more powerful diesel. It's part of a drive to move the Tourneo Custom upmarket and take on models such as the VW T6 Caravelle and Mercedes V-Class.

The Tourneo Custom EcoBlue Hybrid is a first for the van-based people carrier market, and adds a high-capacity 48-volt energy system to the existing 2.0 EcoBlue diesel engine. This means the stop start-system engages in more situations as the electrical system powers the MPV at low speeds.

The system now engages when the Tourneo Custom is coasting, while the driver can adjust the stop-start system to activate at speeds of up to 12mph. Also included (as on all Tourneo Custom models) is an Eco mode that optimises the drive system to deliver even greater efficiency.

As a result, estimated fuel economy for the EcoBlue Hybrid ranges from 32-40mpg, a couple of mpg better than a non-48 volt model. That might not sound like much, but the savings can really tot up on a Tourneo Custom doing a high mileage in stop-start city driving.

If pulling power is more of a priority, Ford is also introducing a 185PS version of the 2.0 EcoBlue diesel. This new unit is 15bhp more powerful than the current range-topper, and is designed to make light work of hauling the larger 8 and 9 seat versions of the Tourneo Custom around. This engine joins the range alongside the existing 105PS and 130PS variants.

Also included in the update is FordPass Connect wifi, which adds a hotspot that allows up to 10 devices to be connected, and a new suite of driver assist technologies. There's blind spot detection with trailer tow assist, which extends the area behind the Tourneo Custom being monitored, adaptive cruise control with intelligent speed limiter and traffic sign recognition, lane assist and active park assist. As before, there will be the choice of standard and long body lengths and up to 9 seats on board, while the Tourneo Connect remains the only model in its class to offer six individual seats in the back.

What do you think of the updated Ford Tourneo Custom? Let us know in the comments below...