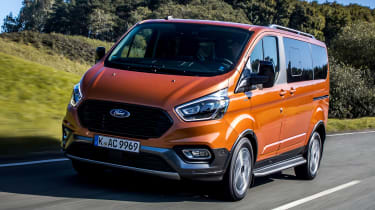 The Tourneo Custom is Ford’s most convincing Active model yet. It’s a versatile people carrier with a less van-like look, while adding the mechanical diff and all-weather tyres gives it as much off-road ability as you’re ever likely to need. Add in a lofty driving position and high spec, and it’s a great alternative to an SUV if you want to stand out from the crowd.

If you need any more evidence that SUVs are permeating every sector of the new car market, then just take a look at the Ford Tourneo Custom Active. Ford has taken its van-based, eight-seat MPV and added some off road-inspired design touches to the mix, in the same vein as Active variants of the Fiesta and Focus.

As ever, the Tourneo Custom Active is based on Ford’s top-selling Transit Custom van, but it gets a car-like interior that’s fully carpeted and packed with handy features. The Active builds on this with a rugged new look.

There’s grey body cladding outside, a new grille, extended running boards, roof rails, diamond-cut 17-inch alloys and Active branding. Step inside, and the seats are part-leather with Active branding, while the six rear chairs can be positioned individually or removed completely. Ford also offers an internal bike carrier that locks into the seat mounts, giving the Tourneo Custom an edge over Ford’s other Active-branded ‘lifestyle’ models. 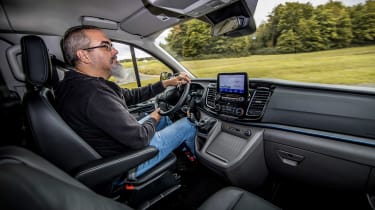 We drove the 182bhp diesel manual variant (Ford’s new PHEV drivetrain isn’t currently available in Active spec), and it’s a set-up that packs excellent punch, although the Tourneo Custom’s tall driving position does a good job of disguising your speed. This van-based MPV is also surprisingly agile, with positive steering for such a large machine, and a slick gearshift.

Our car’s optional all-weather tyres and £660 Quaife mLSD limited-slip differential boost the Tourneo Custom even further. While it’s no substitute for four-wheel drive, the extra traction provided by the mLSD set-up (a system that’s taken from the Focus and Fiesta ST hot hatchbacks) helps the Tourneo Custom find grip, especially when trying to make a quick getaway.

There’s no extra ride height for off-roading, so this really is a set-up that’s designed to get you moving in slippery conditions. However if you drive a passenger-carrying van so that you can carry mountain bikes or other outdoor equipment, then it’s going to give you the extra traction you need when heading off the beaten track.