The Ford Grand Tourneo Connect is the best of the van-based people carriers, offering a car-like drive and bags of room 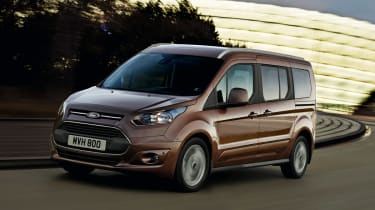 For the largest amount of metal for your money, you could do worse than a van-based MPV – but often you have to sacrifice interior quality, refinement and driving dynamics compared to more car-like alternatives. The Ford Grand Tourneo Connect, on the other hand, is a van-based MPV almost without compromise.

The Grand Tourneo Connect is genuinely entertaining to drive, though unlike the smaller five-seat Tourneo Connect there are no petrol engines available. It’s no sports car – it’s impossible to hide the bulk of the body in corners, and the firm low-speed ride does give away the commercial vehicle origins, but it’s still the equal of some car-based MPVs.

Practicality is the Grand Tourneo Connect’s trump card, as the vast boot can hold up to 2,620 litres with them down – easily beating even the largest regular MPVs. Although the seat layout isn’t as versatile or clever as some of those cars – they don’t fold flat into the floor, for example – it’s still hugely capacious and will easily swallow anything you care to store in it.

Rear passengers will be well catered for, and access is simple thanks to big sliding rear doors and a truly massive tailgate. The looks of the car are pure commercial vehicle – but if you can stomach them, the price drop over a comparable MPV means it’s a sacrifice worth making.