The virtual concept looks very similar to the real-life NSX, but astute listeners will hear a four-cylinder engine note in the promotional video above. This is because the Sports Vision GT is powered by a 404bhp 2.0-litre turbocharged inline-four that is part of Honda’s legendary VTEC engine family.

Power is fed through an eight-speed dual clutch transmission, while weight has been pegged to a very light 899kg. The top speed will have to be discovered by GT Sport customers who can purchase the Honda Sports Vision GT in the PlayStation 4 game for one million credits. 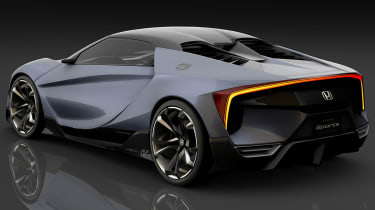 The Japanese manufacturer held an in-house design competition across its studios worldwide, with the team from Los Angeles coming on top. Honda utilised the human-centred design philosophy used on the NSX to mould the Sports Vision GT's shape, hence the similarities between the two.

Instead of using computer simulations, Honda designed a full-scale model, despite not being a production car. Wind tunnel testing was conducted to help achieve optimum aerodynamic performance for keen PS4 drivers.

Honda has had plans for a ‘baby NSX’ in the pipeline for a couple of years to replace the S2000 sports car of the early part of the new millennium. Further speculation grew at last month’s Tokyo Motor Show when a Honda spokesperson hinted that a new S2000 could get the green light.

The Honda Sports Vision Gran Turismo might offer some insight into a potential, real-life baby NSX, but for now it remains a virtual concept for GT Sport gamers to have fun with.

Does this virtual concept get your approval? Tell us what you think of it below!