Half bike, half car: the radical Honda Project 2&4 single-seater 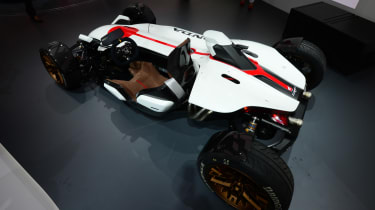 Honda has taken the wraps off its radical Project 2&4 concept at the 2015 Frankfurt Motor Show.

The single-seater is a collaboration between the brand’s motorcycle and automobile design studios, and is intended to combine the open-riding sensations of a motorbike with the manoeuvrability of a car.

It does without all but the essentials, and the body design and mid-mounted engine are a nod to Honda’s 1965 Formula One entry – the first Japanese car to win a grand prix. 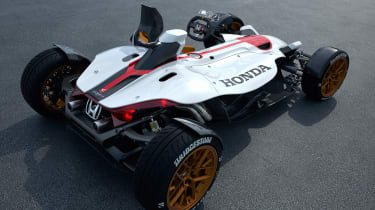 As the concept tips the scales at 405kg, it can make the most of the company’s RC213V competition motorcycle engine, which has been modified from its usual MotoGP duties to run on public roads.

Although performance figures have yet to be released, the 2&4 has been engineered for a highly responsive driving experience. It has a low centre of gravity and stands just under a metre tall. 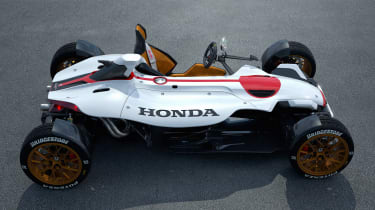 The open-style cockpit with a ‘floating seat’, suspended just above the road, is designed to give drivers an immersive experience – similar to the freedom of riding a motorbike. A hovering, transparent head-up display, as you’d see in fighter jet cockpits, also provides key information without distracting drivers from the road.

Honda says more than 80 designers and creators took part in its in-house ‘Global Design Project’ competition to bring the 2&4 to fruition.

Now read our round-up of all the latest news from the Frankfurt Motor Show 2015.