Honda's 2017 Consumer Electronics Show NeuV concept is a boxy electric commuter, with self-driving capabilities and even its own emotions 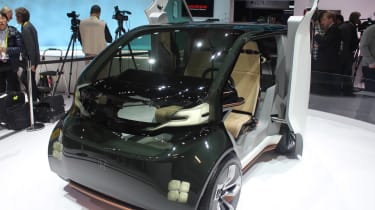 The NeuV is a radical concept that has little relationship to any upcoming production model. With a short wheelbase and tall roof, we’re looking at Honda’s futuristic vision of a so-called “commuter car”. The design is based on the fact cars are stood idle the majority of the time, so the NeuV has been designed to create new value for its owner by also acting as an automated ride sharing vehicle.

It features a large translucent canopy, and the doors – marked out by the angular shards of silver metal – run from wheel to wheel, opening the pod right up. Finishing the look off, the massively flared wheel arches are filled to the brim with large, black and silver wheels. 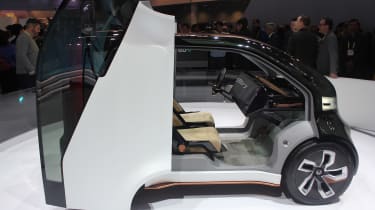 However, the centrepiece of the concept is on-board artificial intelligence software called the emotion engine. The software enables machines to artificially generate their own emotions, and Honda says it’ll add new depth to how drivers and passengers interact with cars.

“Creating a small car that feels extremely spacious is the hardest thing you can do, but that is what we have tried to deliver.”

“The panoramic glass helps with this and gives the car a very premium feel, rather than the city cars we know today. It’s kind of like an iPhone really – a very premium product.”

The NeuV has a wider footprint than a Smart, but offers more interior space than a Toyota iQ. The doors open only 200mm outside of the body to aid parking in very tight spaces, while the interior design is based around a massive artificial intelligence panel which can assist with drivers’ daily tasks. “We treated that as the centerpiece – it’s almost like the grand piano in the living room.”

Although the car looks very futuristic, Renner added: “Throughout the whole process this is a car that we felt should be ‘right now’. All of our decisions made were based on technologies that we are currently working on at Honda. If they pressed the ‘go’ button we could build this right now.”

Sadly, there are currently no plans to do just that, although Renner did add: “Everyone at Honda is very excited about it and wanted to show it here to gauge reaction and hopefully we will get a good response.” The car is envisaged to have 'level four autonomy' and would be electric powered if it was a genuine runner.

The NeuV is part of what Honda calls the “Cooperative Mobility System” - the manufacturer’s running theme during CES. Alongside the NeuV, futuristic technologies developed with mobility in mind are being showcased, including how to use technology to reduce traffic congestion and new modes and methods of in-car connectivity.

How do you feel about the idea of cars with emotions? Let us know in the comments.