The message in our Driver Power 2005 survey was clear: people really love their Hondas. 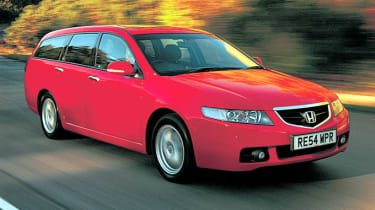 The message in our Driver Power 2005 survey was clear: people really love their Hondas. The company took the first three placings in the Auto Express reliability report, compiled from the responses of more than 50,000 readers, with the Accord finishing just behind the Jazz and S2000. But even the best manufacturer can have an off-day - and that can be the only explanation for our five-month-old Accord Tourer 2.2 i-CTDi.

It's no secret that one of the reasons we rate the Honda so highly is its load-lugging ability. As staff photographer, my camera gear is effortlessly contained in the hold, and DIY jobs are taken in the car's stride - provided you can get into the boot.

You wouldn't expect the tailgate to go wrong, but the Accord's electric door operates from a button on the keyfob. Personally, I think it's a gimmick, and my views were reinforced when it packed up, locking the mechanism so we couldn't even open the tailgate manually. Instead, we had to clamber over the rear seats and pull the emergency release.

We took the car to Ewell Honda, in Surrey, but the mechanics were unwilling to look at it and told us to book the Accord in when they were less busy. Fortunately, all dealerships are not the same, and my local garage, Lindhill Honda in Writtle near Chelmsford, Essex, checked the Tourer over and traced the malfunction to a sender unit. The part was ordered, and two weeks later the problem was solved. Little did I know that I would soon be back with a far more serious fault.

Out of the blue, the power-steering pump started screeching and the wheel juddered when I turned it. Back we went to Lindhill Honda. The technicians quickly diagnosed a leaking steering rack, which would need to be replaced.

The car was deemed unsafe to drive, so I was loaned a Jazz for a week until the necessary parts arrived. It's not all bad news, though. Honda UK claims this is the first time such a fault has been reported, and the courteous garage staff (who kept me well informed) also adjusted the tracking.

These niggles have temporarily knocked my confidence in the Accord, but they haven't dented my overall enthusiasm for it. The blend of ride and handling is spot-on, plus the gearshift and 2.2-litre diesel engine have loosened up beautifully. Fuel economy easily tops 40mpg, so covering 600 miles on a tankful is common. A final confession, though. A few days ago I reversed into a bollard, scraping the back bumper, and I am now cursing myself for not specifying the optional £400 parking sensors.

I'm hoping the next six months with the Tourer will be less eventful. This way I can relax and really enjoy the Accord's attributes - and that doesn't include fighting my way out of the boot! Pete Gibson

Second Opinion I can't think of a better estate car than the Accord - despite the recent problems. Borrowing the Honda for a weekend trip to Nottingham, it proved virtually flawless, returning 43.3mpg while cruising serenely, and our luggage barely troubled the vast load area. Unlike Pete, I'm a fan of the electric tailgate; being able to open the boot while carrying a child and shopping is a great feature. Oliver Marriage, road test editor