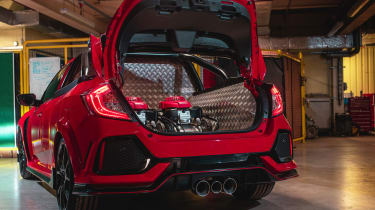 This, according to Honda, is the fastest pickup on the road. The Civic Type R Pickup Truck Concept has been revealed to mark one year since the hot hatch was launched.

Honda is quick to point out that there are no plans to put the pickup into production. The concept, codename Project P, was created by a team of engineers at Honda’s UK manufacturing facility in Swindon.

The concept is based on a pre-production version of the Type R and engineered into a pickup while retaining the road car’s iconic rear wing. It is moveable, however, allowing direct access into the load bay, which can snugly fit a couple of lawnmowers.

No your eyes are not deceiving you...this really is a #Honda #Civic Type R pick-up... https://aex.ae/2knWBeV

No changes have been made to the chassis or powertrain so the pickup stick with the standard Type R’s 2.0-litre four-cylinder turbo, which develops 316bhp and 400Nm of torque. Honda says it’ll cover 0-62mph in less than six seconds and hit 165mph flat out.

The Japanese firm is also considering taking the concept to the Nurburgring to try and set a lap record for the fastest front-wheel drive pickup.