Tokyo's Auto Salon is known for its aggressive mods and this year, Mugen carried on the tradition with its take on the Honda Civic Type R. 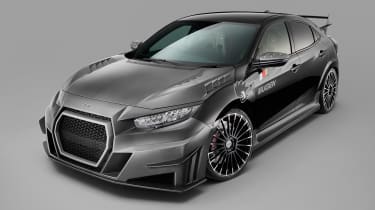 Dedicated Honda tuners, Mugen, took this year’s Tokyo Auto Salon as an opportunity to showcase its newest body kits for Honda models. On display were a few subtle mods for the Insight Hybrid, CR-V SUV and N-VAN kei car. However, the main attraction on the stand was the new kit made for the FK8 Honda Civic Type R.

After showing off a set of revisions to the Civic Type R at last year’s show, the Japanese tuning company has gone one step further this year with a brand-new Civic Type R Mugen RC20GT upgrade package in pre-production form. Mugen says this new version of the car is a tuned-up, racetrack-ready take on the Mugen RC20GT Civic Type R Concept that was exhibited at the 2018 Tokyo Auto Salon.

The creation combines an outrageous body kit and performance focused modifications designed to reduce weight and improve aerodynamics. The new rear wing, side skirts and bumpers, with added dive planes, fins and a diffuser, are all made of carbon fibre. While the re-designed front bumper and large single-frame grille make for a front-end slightly resembling that of an Audi. 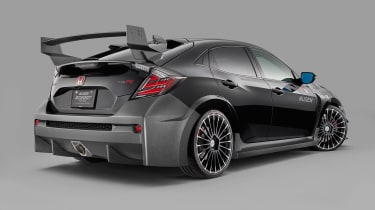 New vents have appeared in the bonnet and the wheel arches are filled with the new 20” lightweight aluminium wheels. The triple exit exhaust synonymous with the Type R has been ditched for a single exit titanium system. The combination of these upgrades and an already extreme Civic for the canvas make for a very aggressive look.

The pre-production model doesn’t only get aesthetic upgrades. In fact, Mugen has focused a lot of its time on the handling and performance of the Civic by making several adjustments. Improved engine cooling has been achieved thanks to new oil cooler and high flow air intake systems. Upgraded Brembo brakes, new adjustable suspension, a new steering wheel, bucket seats and four-point harnesses all help make the RC20GT feel like “the ultimate Type R”, according to Mugen.

This being a pre-production model, Mugen is yet to announce a price for the kit which is still in need of some fine tuning before being fitted to your Civic Type R. Despite any possible tweaks, we can assume the final product will look very similar to the one released at the Tokyo Auto Salon.

What do you think of the Mugen’s RC20GT Type R? Let us know in the comments…