You are a driver who appreciates a fine-handling performance car, but you also have the responsibilities of a family to look after... 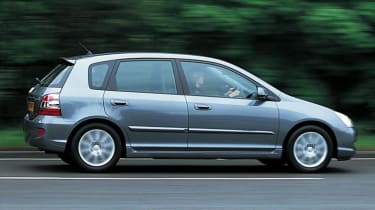 This is a deceptive machine. On the surface, the Civic Type S is a sensible family car; underneath, it's a hard-riding sports hatch. Whether that's the perfect combination or a mix that fails to fill either brief depends on what you want out of the Honda. Make sure you try before you buy, though, as the solid ride could easily put you off.

It's a common problem. You are a driver who appreciates a well engineered, fine-handling performance car, but you also have the responsibilities of a family to look after.

You've checked out what's on offer, but have failed to convince the other half that a Subaru Impreza WRX or Honda Civic Type R is a good idea. Your partner would much rather you bought a nice, sensible Vauxhall Vectra and put your boy racer days behind you.

So what's the answer? According to Honda, it's the flagship of its facelifted five-door Civic range - the Type S. From a distance, it's every inch the perfect family car: sensibly styled, spacious and not too flashy.

Open the door, and you are greeted by a cabin that is more suited to a well equipped hatchback than a sports saloon. Standard equipment includes leather trim, cruise control, a quality sound system, climate control and a smart leather-bound steering wheel.

But beneath that responsible veneer the Type S harbours a few secrets. For a start, the engine is a toned-down version of the unit found in the range-topping Civic Type R. However, even in a less aggressive state of tune, it still offers a healthy 158bhp - more power than many top hot hatches from other manufacturers.

And the sportiness isn't restricted to the powerplant. Under the skin, the Type S gets firmer suspension, and Honda's impressive Vehicle Stability Assist (VSA). This system helps to avoid excessive understeer by reducing the engine's torque and individually applying the brakes on each wheel.

In typical Honda fashion, the five-speed manual gearbox is one of the best we've ever sampled. The spacing of the ratios and the smooth gear selection add to a driving package that makes this Civic a far livelier prospect than its ordinary looks suggest.

As a keen driver, you'll probably enjoy this aspect - but as a passenger you may not. The Type S has a much firmer ride than a standard Civic, which in itself isn't renowned for having the most pliant suspension in the class.

The car tends to thump and crash over uneven surfaces, and rear seat passengers in particular feel every bump and jolt through the cabin. Throw in the optional 17-inch Sport wheels over the standard 16-inch items, and the situation is aggravated even further.

The Type S is a great mix of sporty handling and practicality, but sadly it still requires one or two compromises from the other members of your family. Just don't tell the other half...