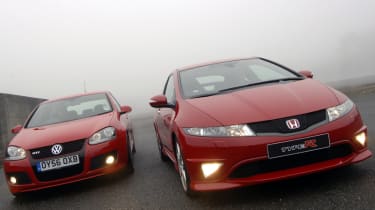 Like you, we can’t wait to find out if Honda has carried over the outgoing Type R’s unique appeal as an incisive, involving driver’s car. The company has certainly managed to make it a more tempting proposition as a daily driver. Lining the Civic up alongside the latest Golf GTI – one of its main targets – highlights the newcomer’s enticing exterior style and cool cabin. If Honda has got the rest as right as that, it will be on to a winner.

How’s this for a fast start to the New Year? Honda has let its Civic Type R off the leash exclusively for Auto Express. And what better way to welcome it to 2007 than to introduce it to VW’s most powerful Golf GTI ever, the 227bhp Edition 30?

Set to be the biggest showdown of the year, the clash of the performance legends gets underway in March, when the British-built Type R goes on sale.

Expected to cost £18,000, and pack-ing an improved version of the maker’s famed 2.0-litre i-VTEC engine, the new charger aims to broaden the Type R’s appeal. Which means its sights are set on VW’s GTI. Why? Well, Honda recognises that the last hot Civic wasn’t to all tastes. Although its high-revving engine delivered thrills aplenty, the super-Civic could be as uncompromising as it was unforgiving. It was a hard car to relax in if you didn’t want a wild ride.

And this is something the GTI has licked. Driving from London up to Edinburgh? No problem. Fancy an early morning cross-country blast? Jump in. Look-ing to impress in the company car park? Consider it done. Unless track days are your thing, the Golf ticks all the boxes.

Especially in Edition 30 guise. With its increased pace, courtesy of an uprated 2.0-litre TFSI engine, the 30th anniversary GTI turns up the heat on rivals even more. So how does the all-new Type R compare when the two square up?

Seeing the hot hatches side-by-side confirms the Honda packs more visual impact than its rival. Its low nose, swept-back lights and tarmac-scraping airdam give a more aggressive stance. There’s no missing the new colour-coded rear wing, either; subtle it isn’t. It fills your view of the road behind from the moment you settle into the driver’s chair.

The central analogue rev counter dominates your line of vision, while on the second shelf above, the speedo is flanked by a glowing Type R logo and race car-style LED shift-up lights. These come into play at 5,200rpm, illuminating every 200rpm up to 8,000rpm.

The seat is low slung, the drilled alloy pedals ideally spaced for serious driving and the three-spoke steering wheel adjusts for a perfect ‘stretched legs, bent arms’ position. All you want to do is hit the red ‘Engine Start’ button...

By contrast, the GTI’s dash is clear and concise. It doesn’t scream excitement, plus you sit higher at the wheel and don’t feel a part of the car, as you do in the Civic. One thing’s for sure; the old Type R’s awkward, upright driving position has been banished for good.

Significantly, its 2.0-litre i-VTEC unit has been reworked to deliver its torque lower in the range. The high-lift valve timing comes in at 5,200rpm, yet still thrives on revs up to 8,000rpm – the point at which all 198bhp is unleashed. Lower gearing and a shift action that’s better than ever offset the minor weight increase to keep the Type R competitive with the GTI. The 0-62mph sprint is said to take 6.6 seconds, while top speed is still 146mph – that’s every bit as quick as VW claims the Edition 30 is.

Engineers have aimed for a focused feel, which will please existing Type R fans, while adding a new level of user-friendliness and a few creature comforts. You can finally order the likes of sat-nav, plus phone and MP3 connectivity, or opt for the plusher GT spec, which is likely to nudge past the £20,000 mark.

The only question is whether Honda has managed to preserve the magic of the original out on the road – and we’ll be able to answer that later this month.