Honda breathes new life into the Civic with styling tweaks and a refreshed cabin, but can it keep pace with the all-new Ford Focus? 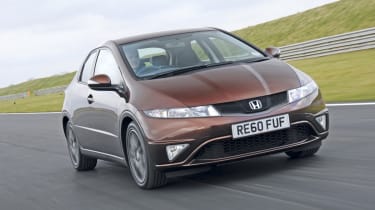 The tweaks to the Civic are almost imperceptible, but the new wheels, upgraded upholstery and on-trend exterior colour do add a little extra class. It’s solidly built, well equipped and spacious too, but the changes are only just enough to ward off the Civic’s advancing age. Its rivals now offer better quality, refinement and efficiency that the Civic can’t match. An all-new model arrives early next year that should address these shortcomings. And it’ll be built in Britain.

Despite its Japanese origins, the Civic is one of the few cars that’s built in Britain. And now the facelifted model has begun rolling off the Swindon production line, we’re first to see if the tweaks breathe new life into Honda’s Focus rival.

Civic spotters will note that the new car now features a black mesh front grille inspired by the Civic Type R, instead of the previous translucent one. Our car also benefits from a stylish new 17-inch five-spoke alloy wheel design, which is standard on Si-spec models, and Honda’s new ionized bronze paint, which is available across the new Civic range.

The exterior tweaks are minor, but the new wheels look sharp, and the new paint appears brown in daylight, which is rapidly becoming the must-have shade of 2011. The rest of the Civic’s styling remains unchanged, and while it still looks different, the car’s design is beginning to date, particularly when compared to new offerings from rivals Vauxhall, Ford and VW.

The interior gets half leather, half Alcantara upholstery. The leather seat bolsters aid comfort, while the Alcantara seat base and back increase friction, increasing support when driving enthusiastically.

As with the exterior, the Civic’s interior design is starting to fall foul of the test of time. The two-tier dash still looks good, with its blue-rimmed dials, but the ergonomics and switchgear quality don’t match those of its rivals. The Civic remains a solid choice, with a spacious, well packaged interior, smooth engine and grippy chassis. However, the latest Golf, Astra and Focus have moved the game on. An all-new Civic can’t come soon enough.

Rival: Ford Focus 1.6 It may have a smaller engine, but the all-new Focus’ EcoBoost unit is turbocharged, making it more powerful yet cleaner than the Civic’s 1.8. The Focus has a small boot and is more expensive, but comes loaded with quality equipment from the class above.