Can Honda’s new Civic Type R beat SEAT and Renault and blast to the top of the hot hatch class?

Sales of hot hatchbacks took a nosedive after the global financial crisis, but high-performance family cars are now making a comeback, and their popularity is most definitely on the up.

After a five-year wait, Honda is back in the ring with its new Civic Type R, and it’s spoiling for a fight against the best in the sector. 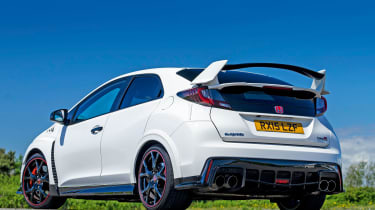 There are some big changes underneath that mean this hot Honda now has the firepower to potentially beat the best, including a new, more powerful 2.0-litre turbo.

However, it faces a tough challenge in the form of our reigning hot hatch champion – the SEAT Leon Cupra – and the old-school favourite, the Renaultsport Mégane seen here in 275 Trophy guise. 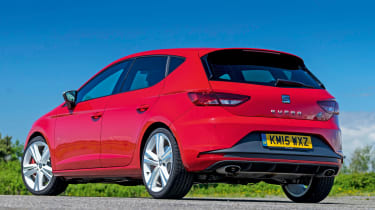 Usable thrills are what the current crop delivers, and on the face of things the Civic Type R has the practicality to match its blistering real-world performance and agile handling.

However, at £29,995 for the standard model, it’s more expensive than both rivals we’ve lined up. So, can the Honda’s extra on-paper pace and versatile cabin edge it ahead of the competition? 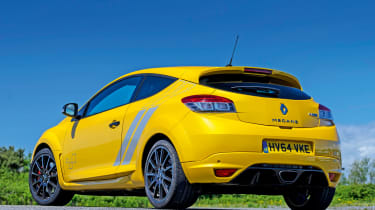 We put the hot hatch trio to the test on road and track to find out...

Click the links above to read individual reviews, and scroll down to see which hot hatch comes out on top... 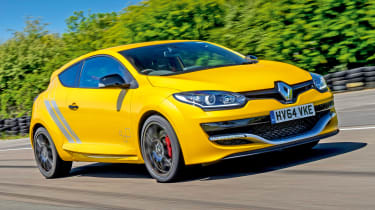 Performance modes are the current trend. SEAT’s switchable Drive Profiles (above) let you tailor the different settings, but with no data readouts. Honda’s +R mode is less customisable yet provides extra info, including a 0-62mph timer. And Renault’s RS Monitor gives performance readouts such as cornering g-force. 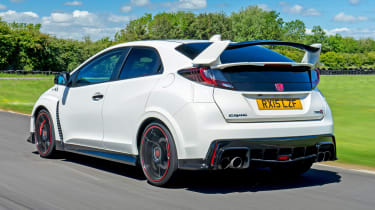 SEAT started the hot hatch war with its Nürburgring lap record of 7:58.12, which Renault’s 275 then knocked four seconds off. Honda has now shattered this with a blistering 7:50.63 time, making it the fastest front-wheel- drive hatch to lap the track.

Looks are subjective, but the Honda’s eye-popping design may be a bit much for some. The Renault and SEAT are more reserved – although in the case of the Trophy, only just. Swap white for black contrast details on the Leon, and it looks even better. 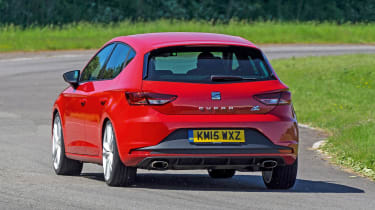 SEAT’s hold over the hot hatch class continues, thanks to the Leon Cupra’s huge spread of ability. In some areas the others may be more focused, but the figures don’t lie: the Cupra is still sensationally fast. It feels alive to drive, too, and responds to your inputs faithfully to inspire huge confidence. Settle down to a leisurely pace and it’s the easiest to live with. Plus, its price advantage seals the deal. 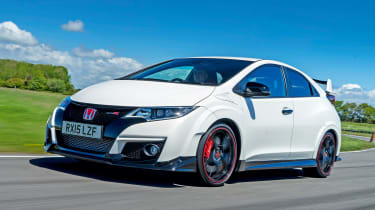 Outright power isn’t enough to knock the SEAT off the top spot. However, the new Civic Type R is a resounding success and has been worth the wait. It mixes devilish speed with surprising practicality, but falls short in a few areas. Its styling will divide opinion, it isn’t as well equipped and it can’t match the SEAT’s comfort – but on a twisty road it’s devastatingly effective. 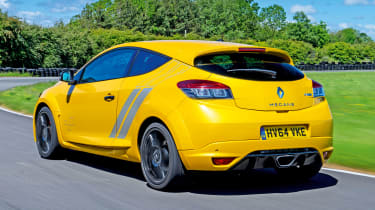 The Mégane RS has aged nicely. Its chassis is as sweet as ever and delivers a brawny hot hatch experience laden with feel. However, costly options are needed to keep up with rivals, so combined with lower economy, steeper depreciation, poorer practicality and a more dated interior, the Renault finishes third. The margin isn’t massive, but rivals are starting to edge further ahead. 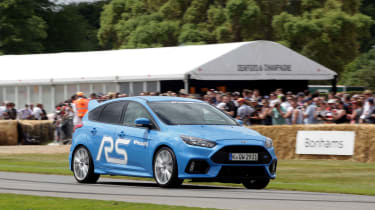 With similar pricing, plus more power and four-wheel drive, Ford’s new range-topping Focus RS could upstage the Civic Type R when it hits dealers next year. It’ll also offer the practicality of a five-door layout.