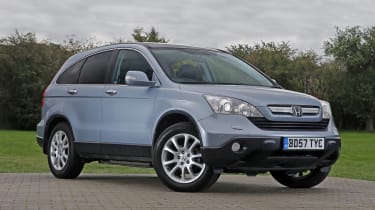 As long as you don’t need more than five seats, the CR-V is a great buy thanks to its dependability, comfort, generous equipment levels and strength. Running costs can be high, especially for petrol models, plus you’ll regret not buying a diesel if you’re planning to tow. As with most cars of this type, the CR-V isn’t designed for serious off-road driving but, while there are plenty of more accomplished compact SUVs out there on the used market, the CR-V can be a good choice if you’re on a budget. Just bear in mind that, as with any compact sports utility vehicle, a CR-V will never be as cheap to run as a family-focused estate car or hatch.

Back in 1994, the Toyota RAV4 was launched and was the first compact SUV to feature the refinement and usability of a family car. Just three years later, Honda introduced its own take on the formula: the original CR-V.

That car achieved critical acclaim and its successor, launched in 2002, raised the bar significantly. So expectations were high when the third CR-V arrived in 2006, and we weren’t disappointed.

It was decent to drive, had a spacious cabin and Honda’s legendary reliability also came as standard. The killer punch, however, was a part-time four-wheel-drive system that cut in only when it was needed, making the CR-V more efficient than many of its rivals. 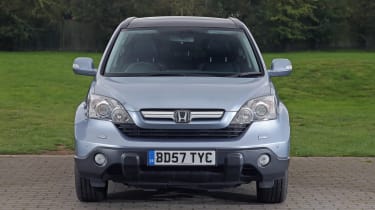 The third-generation CR-V was launched in December 2006, with a choice of 148bhp 2.0-litre petrol or 138bhp 2.2-litre turbodiesel engines and SE, ES and EX trim levels. The petrol engine was offered with an automatic gearbox, but there was no auto option for the diesel motor until a facelifted CR-V reached showrooms in January 2010. This update also brought a new front bumper and grille, redesigned alloy wheels and better cabin materials.

Refinement was improved, too, while a cleaner, more powerful 148bhp 2.2-litre diesel, now badged i-DTEC, was introduced in place of the previous i-CTDi unit. New colours and optional adaptive cruise control were offered, plus auto emergency braking on the EX edition.

The diesel motor feels a lot more punchy than its petrol alternative, and it’s much more frugal as well, but asking prices are significantly higher and the petrol car is more reliable. 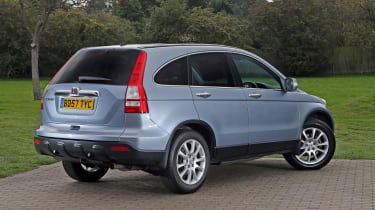 We’d opt for a manual rather than an automatic, because the latter transmission isn’t all that slick and it’s also less economical. All CR-Vs are well equipped and even the entry-level SE comes with powered windows all round, ESP, trailer stability assist and air-con.

Alternatives to the Honda CR-V Mk3

The CR-V has no shortage of talented rivals, including the Toyota RAV4 and Nissan X-Trail. Both have similar kit levels, engine choices and price tags, but be careful of problems with the Nissan’s diesel motor.

The Land Rover Freelander 2 is good to drive, has a strong image and comes with excellent engines, but used prices and running costs tend to be high, plus it doesn’t have the best reliability record. Volkswagen’s Tiguan is another CR-V rival that’s a good option, thanks to its efficient engines, excellent build quality and practicality. 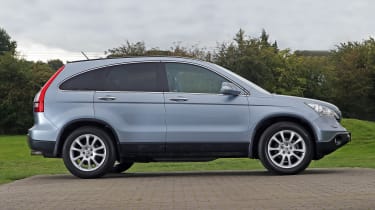 Ford’s Kuga is more affordable and better to drive than most SUVs. Look at the Volvo XC60 if safety is a priority.

Make sure the air-conditioning or climate control works properly; compressors can fail, particularly on early models.

Rear light clusters can leak, leading to condensation building up on the inside of the lens, especially in cold weather.

Electrics are generally reliable on the CR-V, but batteries can go flat due to the ignition switch leaking current.

Door handles are painted silver; they’re not chrome-plated. This paint can peel off; new handles are the only proper fix. 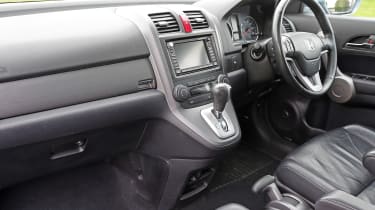 The quality of materials used in the cabin isn’t in keeping with Honda’s semi-premium status, and the dash design is muddled. Yet the seats are comfortable and practicality is boosted by a sliding rear seat. Boot space isn’t spectacular, at 556 litres with the rear seats up, and while they fold flat, capacity is only boosted to 955 litres.

Both engines are chain-driven, so there are no belts to replace. Brake fluid is needed every three years or 37,500 miles at £55, but this, like coolant (replaced every five years or 62,500 miles at £75), is included in services. An air-con re-gas costs £55. 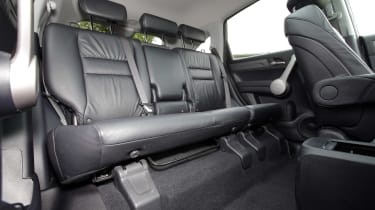 The CR-V Mk3 has been recalled five times. Vehicles manufactured from November 2009 to January 2010 could suffer from leaky injectors and fuel pipes, while diesel models built between August and October 2010 were at risk of having cracked fuel pump seals.

CR-Vs made from July 2008 to June 2010 could suffer power-steering failure. Airbag faults led to two further recalls for cars built up to the start of 2010.

The CR-V Mk3 last appeared in our Driver Power satisfaction survey in 2016, when it came 125th; the previous year it was 144th. Practicality was easily the car’s most popular attribute, while seat comfort was okay, too. Handling, performance and running costs were weak areas, while reliability (101st place) disappointed.