New engine, styling and nine-speed gearbox can’t send 2015 Honda CR-V to the top of the class 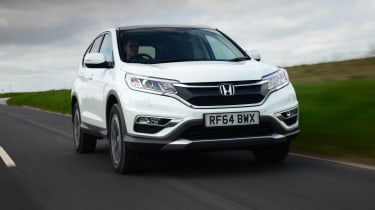 If it’s practicality you’re after, the 2015 Honda CR-V carries on where the old car left off – but despite some design tweaks, impressive efficiency from Honda’s new downsized, more powerful diesel engine and a nine-speed automatic gearbox, the CR-V still isn’t great to drive. In range-topping trim as tested here, it’s expensive, too.

The crossover trend shows no sign of letting up, with plenty of new SUVs set to hit the market this year – so to keep its offering fresh Honda has facelifted its CR-V for 2015. The main changes centre around a few styling tweaks to update the car’s design, as well as a new high-output 1.6-litre turbodiesel engine and a nine-speed automatic gearbox. We got behind the wheel of the top-spec EX model to find out if these changes add up to a big improvement.

It doesn’t take many miles behind the wheel to realise the CR-V still isn’t the best crossover to drive, though. It might be 35kg lighter than before thanks to the new auto box, but the chassis still feels dull and lifeless. Despite the revised car’s quicker steering the CR-V is still slow to change direction, and although the ride is comfortable, the soft suspension means the Honda floats through corners – point the CR-V through a series of bends and it never feels particularly quick to respond or very well tied down. 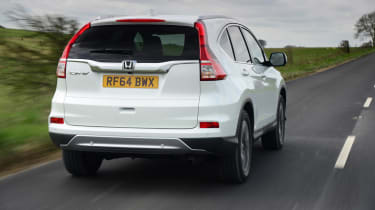 Unfortunately, this trait is reflected in the powertrain. Honda has managed to cut the CR-V’s CO2 emissions massively with the new twin-turbo 1.6-litre four-cylinder diesel engine and nine-speed gearbox, but it’s not particularly quick or responsive.

With 158bhp on tap the 1.6 unit kicks out 10bhp more than the 2.2-litre engine in the old car, but it doesn’t feel much faster. You have to be heavy with your right foot to get the CR-V moving quickly, and that’s partly down to the gearbox. It’s smooth and, with a long ninth gear for high-speed cruising, makes motorway driving more refined. But the gear changes are slow (even in Sport mode or using the steering wheel-mounted shift paddles) and the Honda’s acceleration is sluggish. 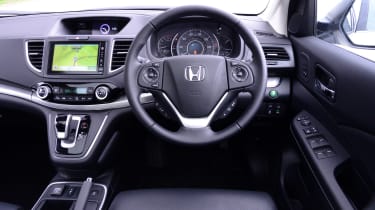 Things begin to look up further for the latest CR-V when it comes to the refreshed design, as the new styling makes the car look much easier on the eye. The Honda’s basic shape is unchanged, but sleeker headlights, bigger 18-inch alloy wheels and revised bumpers reduce the CR-V’s visual bulk.

The big, boxy Honda looks better, then, but happily it’s not lost any of its massive practicality. The boot is huge, with 589 litres of luggage room on offer – drop the rear seats with the easy-fold handles in the load bay and the space on offer increases to 1,146 litres thanks to Honda’s Magic Seats.

In one motion the lever flips the bases of the rear seats forward and folds the backs down to maximise room inside the cabin, although the floor isn’t completely flat in this configuration. There’s plenty of other storage around the cabin, and there’s masses of room in the rear.

The interior feels robust and strong rather than expensive and upmarket, but on the top-spec EX model we tested standard features such as heated leather seats, a huge panoramic glass sunroof, keyless go and a power tailgate add a bit of much-needed sparkle to the CR-V’s image. However, at £34,120 for the 1.6 EX auto model with four-wheel drive, the CR-V is pricey compared to its rivals – even if its efficiency is a big plus point. 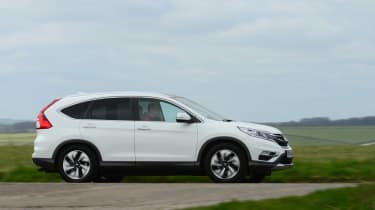 On top of this, although the Honda gets sat-nav, DAB radio and a rear view camera amongst other features, the big touchscreen multimedia unit looks cheap and isn’t the most intuitive to use. Unlike rivals such as the Mazda CX-5 and Ford Kuga, it looks like a bought-in part that’s been put into the dash, rather than a bespoke system designed for the car.

These are small niggles in what is a very usable, road car, however. The CR-V always offered massive practicality and strong safety, so with lots of space and features like autonomous braking, this new car is no different. It’s more efficient than ever thanks to the long ratios of the latest nine-speed gearbox and its downsized yet more powerful engine, but these alterations haven’t turned the CR-V into a great driving crossover. 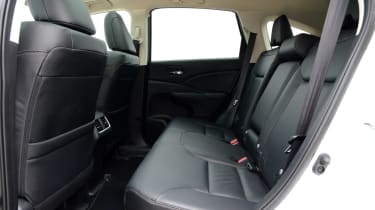 Moreover, there’s plenty of reassuring grip on offer from the four-wheel drive system. It’s a relaxing cruiser that’ll eat big miles with ease and will provide comfortable transport for families rather than a sharp, fun to drive crossover like Mazda’s CX-5 – so if you’re after driving thrills then either the Mazda or the Ford Kuga will be a better bet.

Overall the CR-V is improved and still just as comfortable – but there’s one major problem. For your cash you can buy much more quality and badge appeal in the form of an Audi Q5 or BMW X3. It’s hard to ignore the extra badge prestige of these models, but if you’ve got your heart set on a CR-V, we’d recommend sticking with a mid-spec trim level.