There's no doubting the quality of the Honda. But the two-rows-of-three layout is an acquired taste, and the FR-V looks pricey. 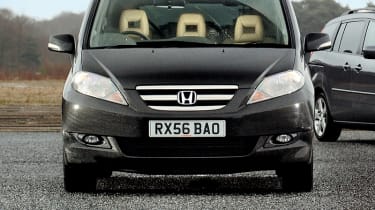 DrivingHonda revised the FR-V in early 2007, ditching both 1.7-litre and 2.0-litre petrol engines and replacing them with a single 140bhp 1.8-litre unit. Already seen in the Civic, it's a smooth unit and is happy to rev hard - as we'd expect from a Honda. The thing is, it feels too sporty for the FR-V; all we want is lots of power at low revs, particularly if all the seats are occupied. The issue was accentuated by our test car's sluggish (but optional) five-speed auto box. But there is another option - the 2.2-litre i-CTDi diesel, which is one of our favourite diesels on the market. It's dearer than the 1.8, but in our eyes, it's worth it. Both FR-Vs share the same broad stance; with taut suspension, they handle well. But this means the settings are on the firm side, while it can also be tricky to negotiate through urban width restrictors, or down narrow country lanes. The ride is much more noticeable on smaller ruts and ripples than bigger obstacles such as speed bumps as well.

MarketplaceThe Honda has so far been the 'nearly man' of the compact MPV market. It should be flying out of showrooms, yet its sales are a fraction of the class leaders', and a straw poll of passers-by will soon show that few know it exists. This is a surprise, given its unique six-seat layout, in two rows of three. In response, Honda carried out a little light cosmetic surgery in 2007; new front grille, door handles and different light clusters. Inside, changes were almost imperceptible. Its most obvious rival is the Fiat Multipla, which also offers a three-by-two seating layout. Better-selling competitors include the Vauxhall Zafira, Renault Scenic, Toyota Corolla Verso and Citroen Grand C4 Picasso.

OwningThe high-set driving position provides a clear view of the road ahead, while small windows at the base of the A-pillars also help when pulling out of junctions. However, thick rear columns make reversing and changing lanes difficult, while the curve of the tailgate glass distorts images in the rear-view mirror. As for the seating position, it's good for shoulder room - until you add a central occupant! The middle seat is large enough for adults, though the three-abreast layout has compromised design and layout. The driver sits close to the door and, although the dash ergonomics are adequate, it's not the most attractive cabin. But it is generously equipped. In the rear, the middle seat is set slightly back from the outer pair (which don't slide) to create more shoulder room. In fact, all-round space is quite good, and the seats fold easily, too. However, carrying capacity is only 1,049 litres, due to the curved bootlid and shorter load length. However, with six on board, there's conversely far more luggage space than in seven-seat rivals. 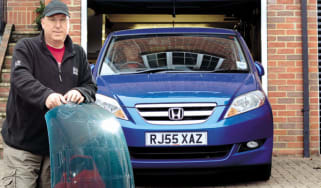 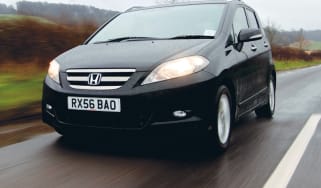 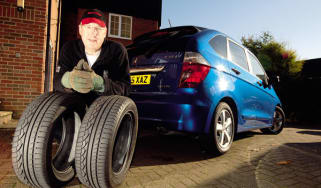 As the weather is getting colder, our Honda FR-V has been equipped with winter tyres to help it through the next few months
Honda FR-V 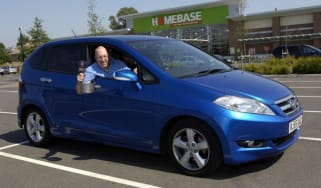 Now just past the 10,000-mile mark, our Honda's fuel consumption has settled to around 35mpg
Honda FR-V 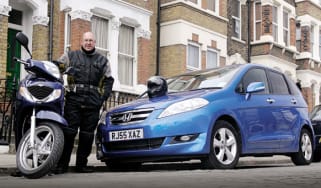 The Honda FR-V joined our fleet just weeks ago and is already winning fans. Read on to find out why...
Honda FR-V 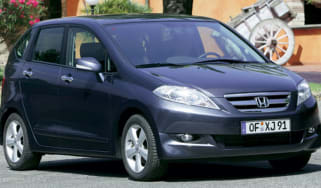 We've already been impressed by the Honda FR-V in 2.0-litre form. With its excellent combination of value for money, great packaging and decent drivin…
Honda FR-V 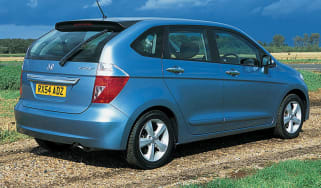 If you want a lean body and a six-pack, you'd have to spend hours at the gym. Alternatively, you could visit your local Honda dealer, where the all-ne…
Honda FR-V 2004 review 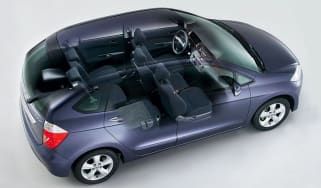