Does Honda's FR-V offer the right blend of practicality? 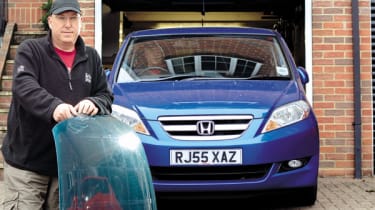 Our consumer team needs a car that's big and practical enough to carry lots of products, testing gear and people. Is the six-seater honda FR-V up to the job?

Bonnets, boxes, bored teenagers - our Honda FR-V has coped with all this and more during the past 14 months and 21,000 miles. And the Adams household has become used to tackling any job without thinking twice thanks to the versatility of the six-seater.

Whether it's being used as a van to carry accessories being reviewed for the magazine, or a taxi for transporting testers, the big Honda switches so easily between a wide variety of roles.

Few vehicles could handle the scrapyard panels I bought for our Products section car care tests or the hundreds of samples I have carried to my workshop.

The unusual two-rows-of-three seat design certainly helps, as it does make the FR-V broader than most rivals. True, the car will only go in my garage if I fold the wing mirrors first, but on the road you don't really notice the width.

The cabin layout does demand a few compromises, however - and in the front, this is chiefly the positioning of the handbrake lever under the dash. It was irritating at first, although I soon realised it was a small price to pay for the bonus of that centre front chair. Fold it, and not only can it be used as an armrest, but there's a handy storage tray on the seatback, too.

In the back, the security cover over the boot is mounted across the middle of the bay, rather than just behind the rear bench. This is to allow sliding space for the centre seat, but means it's a pain to get luggage underneath, so it was left on the floor most of the time. Again, though, it's a minor issue on a car that does so much so well.

Mechanical faults have been restricted to a loose rear wiper and a CD changer that needed replacing. But the bodywork hasn't got off so lightly; the FR-V was keyed in a car park, scraped by another vehicle and hit by a rock thrown up from a passing car on the road. Wicked Wheels (0870 3003 224, www.wickedwheels.co.uk) carried out the repairs for a total cost of £499. So despite its unusual layout, as a family car the Honda is really tough to beat.