The Honda FR-V joined our fleet just weeks ago and is already winning fans. Read on to find out why... 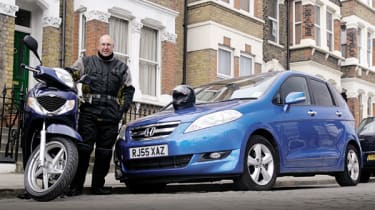 It has to be the ultimate park and ride scheme! Forget crowded buses and car parks miles from town - this duo from Honda is the solution to the long-distance commuter. A car for the high-speed haul down the motorway, parked free on the outskirts of town, then a scooter to slice through the traffic to work. The two-wheeler is also free to park, and there's no congestion charge for those working in the heart of London. Genius.

The Honda SH125i has just joined our fleet, so we will be reporting on our jam-busting scheme later, but the FR-V has been with us a few weeks, and is already winning fans. It doesn't look as bland or boxy as most other compact MPVs, and the logical seating layout has proved very easy to use. The centre chairs slide, giving massive legroom in the back and no shoulder clashes up front.

There are drawbacks, though. At six-feet three- inches tall, I'm well above average size, but other drivers have complained about how close you sit to the door, making it easy to bang elbows on the armrest when turning the wheel.

As for myself, I have found it hard to adapt to the odd action of the handbrake, which is mounted under the dashboard, while the centre seat headrest partially impairs vision through the rear view mirror. Visibility is made worse by the fact that the rear wiper has worked itself loose, so it fails to sweep the centre of the back window. Finding a comfortable driving position isn't hard, however, as the steering wheel adjusts for reach and rake and the seat can be raised and lowered, although I could do with more legroom. The off-clutch rest is also quite high, although tucking my left foot under the pedal eases the problem.

And the Honda is wide. Even though you get used to it after a few weeks, I have to fold a mirror to fit the FR-V in my garage. Fortunately, however, they are electrically operated.

If this all sounds a bit negative, it shouldn't, because I'm really enjoying the Honda, and the 138bhp diesel engine is an absolute gem. Al-though ours has tended to be slightly smoky on start-up, once warm it's refined, flexible and swift. Gearshifts are slick, but they are kept to a minimum, as the engine will pull from low revs - perfect for trickling through heavy traffic.

Motorway cruising is a relaxed affair - essential on my 50-mile commute - although there is a little wind noise. The Honda is easy on the pocket, too; so far, the 2.2-litre i-CTDi has been returning just under 36mpg, giving a range of around 400 miles.

So, the FR-V is a welcome addition to our fleet and ideal for carrying all the products I test. Even better, with the SH125i, it may be the answer to my commuting woes. I'll keep you posted.

Having used the FR-V to ferry six blokes to a Six Nations rugby international at Twickenham, I can vouch for its carrying capacity. With everyone sat in two rows, load space was unimpeded, so there was room for coats and no need to squash anyone into a flimsy boot seat. It was a bit of a scrum up front and the match result was a disaster, but that didn't take the shine off the Honda.Oliver Marriage, road test editor