The Honda FR-V has a novel three-by-three seat cabin and an economical new 1.8-litre petrol engine 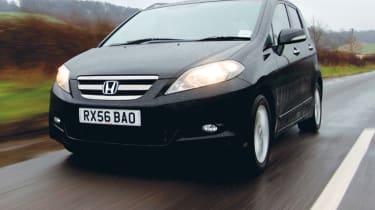 The latest changes give Honda’s people carrier a welcome lift, yet top-of-the-range models still look expensive, despite the FR-V’s novel three-by-three seat layout and spacious cabin. The new 1.8-litre petrol engine simplifies the line-up and offers good fuel economy. But unless you absolutely must have an automatic, we would go for the standard six-speed manual version. It’s cheaper, more frugal and faster than the self-shifter.

It's often said that two’s company and three’s a crowd – which perhaps goes some way to explaining why Honda’s mid-sized MPV, the FR-V, has not enjoyed the success of the Jazz.

Despite its novel three-by-three seating layout, it has been left trailing in the sales charts by more conventional rivals such as the Renault Scenic and Ford C-MAX.

To try to correct this, Honda has given its people carrier a facelift and a new engine. But you’ll struggle to spot the exterior changes, which are limited to a new grille, fresh light clusters and revised door handles.

The interior has received an equally light touch, with the wood trim ditched in favour of a carbon-like finish and the addition of an auxiliary socket for the stereo the main alterations.

To find the big news you have to open the bonnet, where the 1.8-litre unit from the Civic hatchback has replaced the existing 1.7 and 2.0-litre petrol engines.

It’s available alongside the impressive 2.2 i-CDTi diesel, and even comes with the option of a five-speed automatic – a first for the FR-V. But the £1,100 self-shifter saps the 138bhp engine’s performance. Not only does it add 1.8 seconds to the 0-60mph dash compared to the six-speed manual, but it dulls the unit’s responses. This makes the FR-V feel underpowered, especially in fast-moving traffic.

In manual form, the 1.8-litre combines the economy of the old 1.7 engine with the performance of the 2.0-litre, making it a welcome addition to the line-up. But even with the styling revisions, it’s not enough to lift the Honda to the top of the class.