Now just past the 10,000-mile mark, our Honda's fuel consumption has settled to around 35mpg 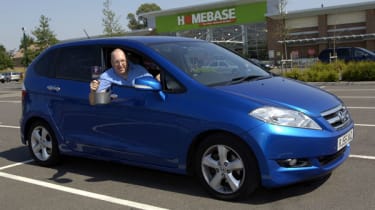 Our long-term Honda has spent so much time at builders’ merchants, DIY sheds and the council dump recently, we might as well have slapped painter and decorator stickers on the side.

An extended holiday for some home renovation saw the FR-V in its element, switching effortlessly between workman’s wheels and teenager’s taxi. And the rear-seat layout can take a lot of the credit – pull three releases and the chairs fold flat. There’s no lifting bases, removing headrests or adjusting front seats – just tug and fold.

What’s more, the space left copes with pretty much anything. Even dumping a long living room carpet left seats for two in the front thanks to the neat centre chair. In fact, the only thing to defeat the Honda was a Rotax Junior kart, when I helped 14-year-old James Montgomery from Jersey get started in motorsport. We had to remove a few parts from the machine before it squeezed in.

Still, the interior is showing little evidence of all this heavy-duty use. The most noticeable sign is a slight elbow-sized dent in the driver’s armrest.

Despite my long break from the office, the miles have been climbing; the FR-V has now passed the 10,000-mile mark. Fuel consumption has settled around 35mpg – not bad for the swift and refined 2.2-litre i-CTDi diesel engine, which is a real star.

The unit is flexible enough to keep gearchanges to a minimum in town, but has plenty of urge for when the roads open up. Our only gripe is an irritating whine – it’s become more obvious in the warm weather as we’ve had the windows down.

Now I’m back in the office, I’ve been enjoying the ultimate park and ride – Honda’s FR-V and SH125 scooter. The 40-mile motorway section of my daily commute takes around an hour, before switching to two wheels for the final 12 miles – completed in around 30 minutes. The combination cuts more than half an hour from my rush-hour journey time. And there’s money to be saved, too, as the SH125 is averaging around 90mpg, plus there’s no congestion charge or parking to pay...

Yet while the scooter has cut out the hassle, there have been a couple of niggles on the FR-V. The rear wiper worked loose, although this was fixed during one of the four visits to the dealer for the faulty CD changer to be replaced. A side panel was keyed while the car was parked, too, but worse still was a rock or bolt thrown up from a car in front, which gouged the roof and driver’s door. Shame it can’t be repaired with Polyfilla and emulsion; I’ve had a lot of practice with them lately.

I borrowed the FR-V recently, and although its powerful diesel made for comfortable motorway cruising, the light, vague steering was a little disconcerting. Even at higher speeds, it doesn’t seem to weight up significantly, so you’re always searching for the straight ahead position. Still, I can’t think of many cars which let you fold the rear seats to accommodate a couple of bikes and still have enough room for three adults.Marc Mustard, staff writer