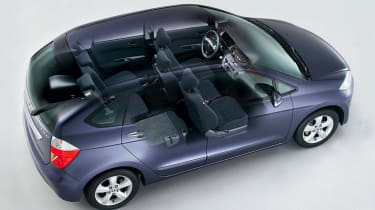 The FR-V's neat three-abreast layout is great for parents who want to keep a close eye on their children. It's fun to drive, too, but we expect it to be quite costly given the firm's upmarket aspirations. The cabin is cleverly conceived, yet doesn't go the extra mile to plushness. Honda would reply that the cost goes on the engineering.

There's an air of expectation surrounding Honda's newest family car. The six-seater compact MPV, aimed at the Ford Focus C-MAX, Fiat Multipla and Renault Scenic among others, is expected to offer new levels of practicality in this ultra-competitive area of the market, building on the success of the versatile Jazz.

Our long-standing favourite supermini has one of the most practical cabins ever, so a new Honda mini-MPV is bound to be a bit different. And it is.

The FR-V - the letters stand for Flexible Recreational Vehicle - seats six in two rows of three, as with the Fiat Multipla. But it's even cleverer than that. The centre front chair is designed to slide further back than its neighbours, so shoulders can overlap, while the giant two-passenger airbag is further away, and is a little narrower to suit a child. There are Isofix child-seat mountings, and it folds flat into a table with the cushion opening up to reveal storage space and more picnic surfaces. The central occupant gets their own air vents and sunvisor, plus a guard on the floor to stop stray feet tangling with the driver's legs.

In the back row, ahead of a generous boot, the rear seats disappear individually into the floor to make a flat load area. One movement hinges the cushion forward and down, and the backrest stows flat on top of it. Plenty of space makes for a fine piece of packaging.

Yet the Honda is less likely to scrape width-restrictors than the broad and sometimes unwieldy Multipla. So how does it do it? The body is narrower mainly because the handbrake, instead of being beside the driver's seat, is a pull-out - and slightly awkward - lever under the dashboard, just below the gearknob. It's spring-cushioned, so that knees won't get hurt when it's pulled to the 'on' position. Honda claims the FR-V is a 'premium' car that's a cut above mainstream rivals, but while the engineering is clearly to the company's usual high standard, the interior lacks the Scenic's soft, welcoming ambience. The top of the dashboard is padded, yet many other surfaces are made of hard, albeit neatly moulded plastic, and there's an excess of fake aluminium trim, which cheapens the look. The pop-out triple cup-holder under the dashboard is clever, though.

Outside, near-vertical side windows and slender doors point to the impressive cabin width. However, some of the detailing is coarse - the big fake-alloy door handles, for example - and the FR-V doesn't immediately look like a Honda, despite what its designers call a 'dynamic crouching form'. What the angular yet curved body hides, though, is a modified CR-V platform with a longer wheelbase and no four-wheel drive.

Engines are 1.7 and 2.0-litre petrol units for launch, with the Accord's impressive 2.2 turbodiesel appearing in early 2005. That wide track - which is broader than a Multipla's - is designed to reduce body roll in this tall car without the need for stiff springs. And certainly our 150bhp 2.0-litre version, with its six-speed manual gearbox, felt stable and smooth in bends.

The steering, which unlike the Civic's is hydraulically assisted, is accurate and well weighted, while the FR-V corners flatly and keenly, plus is supple over bumps, too. In typical Honda fashion the engine is smooth and revvy, and even our pre-production car seemed solid and rattle-free.

The FR-V is one of the more entertaining mini-MPVs to drive -although reversing it into a space is a challenge. That's because the rear windows are small and the pillars thick. Parking sensors will be an option well worth having.