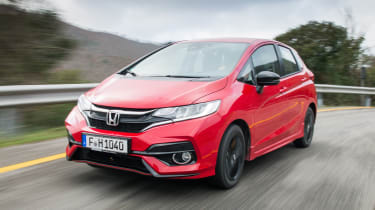 Practicality is where the Jazz excels. Nothing this side of a Nissan Note has as much outright space, with the little Honda offering more room than many cars in the class above.

With a functional but futuristic layout inside, the Honda offers plenty of usability and storage: there are loads of cubbies, the door bins will take a bottle of water and there are two cupholders ahead of the gear lever. There’s another by the steering wheel, as well as another lidded bin behind the handbrake; and, although the glovebox isn’t huge, it’s big enough for various bits and bobs.

As well as the Cargo Pack, Honda offers a number of practical options such as a boot net, boot mat and dog guard. And despite its light weight and 123Nm of torque, the Jazz can tow a 1,000kg braked trailer if required.

Without making the car externally huge – it’s still less than four metres long, at 3,995mm – Honda has managed to deliver an interior that is more than capable of carrying four people in utter comfort. Even five average adults would be no problem. 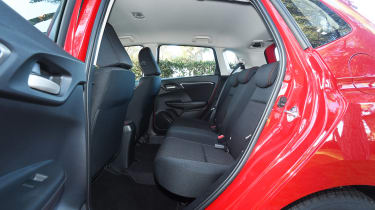 The wheelbase (distance between front and rear axle) is 30mm longer than in the old car, and from bumper to bumper the Jazz has grown by 95mm over its predecessor.

Rear seat passengers benefit from 115mm more legroom and an additional 20mm of shoulder room compared to the Mk2 Jazz. Believe it or not, Honda actually claims more rear knee room is available in the third-generation car than you’ll get in a Mercedes-Benz S-Class.

The latest Jazz carries over the trick Magic Seats from the previous generation, so the rear bench flips up like a cinema seat to reveal even more luggage room, thus improving flexibility. There’s a useful 354 litres of boot space with the back seats in place.

With the seats down, there’s a cavernous 1,314 litres of space up to the ceiling – more than all its main rivals and only surpassed by the now-discontinued Nissan Note (1,495 litres).