Bargain supercar the Honda NSX is fast becoming a cult classic, so what should you look for in early examples? 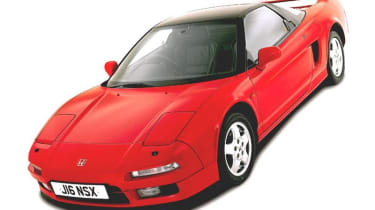 Believe it or not, you could own a supercar such as this for the same price as a new entry-level Vauxhall Astra. It's true - and, better still, while Honda's stunning NSX is fast and handles superbly, it's also docile, reliable and needn't cost a fortune to run.

Production ended last summer, and a replacement is still at least two years away. This means that many owners are hanging on to their cars - but if you can track down an early example, you could end up with a motoring legend. Here, we look at the pros and cons of owning Honda's technological tour de force.

The earliest and cheapest examples of the NSX start from around £12,500, but that will get you only a worn example, so you're better off spending more.

To pick up something really good, you will need to splash out closer to £20,000, while the last of the desirable pop-up-headlamp models fetch up to £35,000 at dealers. To secure one of the most recent machines - which will be virtually brand new - you will have to pay as much as £55,000.

Be wary of cars which have lowered suspension - ground clearance is tight on standard models, which means front spoilers are prone to damage. A well maintained NSX will last well, so don't be afraid of high-mileage cars - as long as they're priced realistically.

Most buyers go for examples without power-assisted steering, while the automatic gearbox is unloved. The Targa version is fine, but purists will prefer the tin-top's stiffer bodyshell. Finally, watch out for accident damage - bent aluminium cannot be repaired easily.

Impressively, during 15 years of UK sales, there were never any NSX recalls.

Peter King's 1991 NSX is one of the oldest examples around, but even with 115,000 miles on the clock, it looks like new. He told us: "Because it's so docile, my Honda gets used on the road all year round - and compared to other supercars, it's cheap to run."

Peter, from Wokingham, Berkshire, continued: "A new clutch cost £1,200, with a replacement cambelt £700. And entrusting the car solely to approved Honda dealers is worthwhile; the NSX may cost more than a Civic to service, but it's rather less than a Ferrari!"

If you are looking for something fast and different, a used Honda NSX makes a lot of sense - but there aren't many to go round. Only 400 or so were sold in the UK during more than a decade of production, and values of later examples are beginning to creep up as demand increases. Get in quick while you can, because not only will you own a great driver's car, but you'll also have an appreciating classic. We like the great driving experience, strong reliability, relatively low running costs and looks. But watch out for its appetite for rear tyres,lacklustre Honda image, limited availability due to lack of models sold, damaged bodywork and electric window faults