The Honda NSX has finally arrived but can Honda's supercar beat the Audi R8 V10 Plus and the Porsche 911 Turbo? 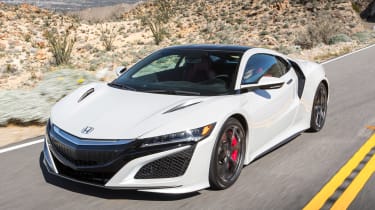 This is a very competitive sector of the sportscar market at the moment, but the Honda NSX is striving to offer something new and different with its tech-heavy hybrid powertrain. It feels easy to drive quickly and yet also easy to live with day to day.

The new Honda NSX has felt like a long time in the gestation, but now it’s here was it worth the wait? Well, if you hankered after a Porsche 918 Spyder but couldn’t quite stretch to its £650,000 price tag, then the NSX and its very similar layout could be the car for you.

Mounted behind the driver is a 3.5-litre twin-turbo V6 petrol engine putting out 500bhp. However, what makes it stand out from the crowd are the trio of electric motors that augment the propulsion of the internal combustion engine. There is one electric motor situated between the V6 and the gearbox, while there are another two in front of the driver, powering the front wheels. This all adds up to a total output of 573bhp and 645Nm.

The effects of this hybrid powertrain are really threefold. First, you have the ability to drive around purely on electric power, although the claimed combined consumption figure of 25mpg is perhaps not as impressive as we might have expected. Then there are the straight-line performance benefits. We did a launch control start and off the line you really can feel the presence of the electric motors, both in terms of the traction and the low-down torque. Honda hasn’t actually released any 0-60mph claims for the NSX, but the thinking seems to be around 3 seconds. 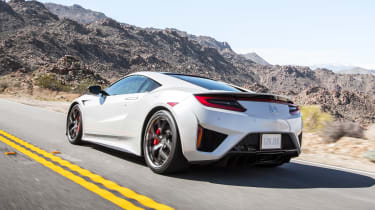 Finally, the hybrid system also allows Honda to create something called Direct Yaw Control. This largely relies on the torque vectoring abilities of the front axle, where each wheel can be independently accelerated or braked to help turn the car into a corner. The aim with this is to make what is essentially quite a heavy lump (it weighs 1,725kg) behave like a much lighter, more nimble sportscar.

It all sounds like it could make the NSX a baffling car to drive, but actually that couldn’t be further from the truth. Our first chance to drive the NSX was round the Thermal Raceway circuit in California (the NSX is being built in the USA) and it immediately felt very easy to drive very quickly. The steering wheel is about the same size as a Ferrari 488’s and, combined with a quick rack, has clearly been designed to allow you to keep your hands fixed at the quarter to three position. You can comfortably lean on the grip of the front tyres during the first part of the corner and then the traction of the all-wheel drive system pulls you out with impressive stability. If you want to get the car moving around a bit more then all you need to do is hold onto the powerful brakes a little longer as you turn into the bend.

The gearbox is a nine-speed dual clutch item with shift paddles fixed to the back of the steering wheel. You can leave it to shift automatically and both on the track and on the road it will do an impressive job of shuffling between the ratios. Having so many gears to choose from can be a little confusing if you choose to shift them yourself however, an extra late change sometimes being required as you brake for a bend. 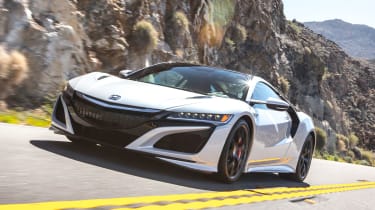 On the road the ride is very impressive, feeling supple and pliant whichever of the four driving modes you choose for the magnetorheological dampers. Honda has worked hard on the ergonomics of the cabin too, so the A-pillars are impressively thin giving you great forward sight lines. The biggest disappointment on the road is that the engine sounds rather dull and dreary below 4,000rpm. It is great when you are driving quickly and holding onto gears longer, but it would be nice to feel like you’re in something special even at lower revs.

On a practical level, storage is a bit of a weak point. There are relatively few cubbyholes or cup holders in the cabin and the lone boot situated behind the engine doesn’t feel as capacious as others in the class despite the claim that it will swallow a set of golf clubs. While luggage space might not be the primary reason for buying a £130,000 sportscar, this is a very competitive part of the market at the moment and every little thing is likely to be scrutinised. 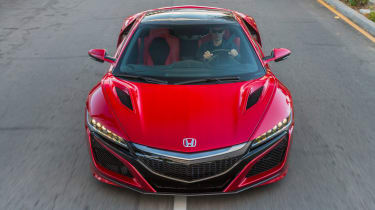 Choices in the class range from the new McLaren 570S, to the dependable Porsche 911 Turbo, to the fantastic sounding Audi R8 V10 Plus and the technologically advanced BMW i8. So where does the NSX fit in? Well, more exposure to the car in the future might clarify things, but our first impression is that it feels like it is trying to take a little bit from all of these rivals. It looks like an archetypal wedge of supercar exotica, a little fussy in the detailing perhaps, but fantastic when it is on the move. It is also extremely easy to drive very quickly. On the other had if you drive it in the Quiet mode then you have an eminently useable machine that is very easy to pilot day to day around town. Ultimately when you add all this together, it might not re-write the rulebook like the original NSX did, but nevertheless its Hybrid powertrain does feel like it offers something different.