The hills are alive to the sound of supercars as the reborn Honda NSX takes on Porsche’s 911 Turbo. Which comes out on top? 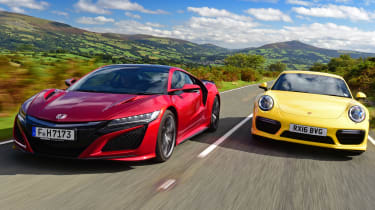 It’s 25 years since Honda stunned the supercar establishment with its bold NSX. Designed to take on Ferrari and Porsche, the sleek mid-engined machine mixed scorching pace and sublime handling with unrivalled comfort and usability.

Yet despite setting new class standards, the Honda failed to tempt buyers from established European brands, and the last models rolled out of the factory in 2005.

Fast forward a decade and the NSX is back for a second crack at the supercar crown. Using a hi-tech hybrid powerplant and built from lightweight materials, the all-new second-generation car is every bit as cutting edge as its predecessor.

However, the competition hasn’t stood still, and one of the class’s most advanced and exciting cars is the Porsche 911 Turbo. A recent facelift has added more power to an exotic spec that includes four-wheel drive, four-wheel steering, twin turbos and active aerodynamics. Plus, all this high-performance paraphernalia is wrapped in a standard 911 package, which means decent practicality and everyday usability. 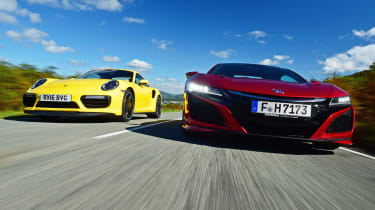 Both cars feature six cylinders and a pair of turbochargers. But while the Porsche favours a conventional internal combustion approach, Honda has boosted the output of the NSX’s V6 with two electric motors for the front wheels and another between the gearbox and engine. Surprisingly, it’s the purely petrol Porsche that delivers the most torque. 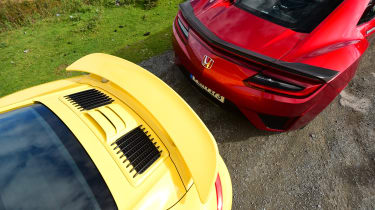 Honda has adopted a ‘total airflow management’ system that does away with active aerodynamics. Instead, the car’s sculpted exterior is designed to efficiently manage air as it rushes over the surfaces. By contrast, the 911 gets extendable front and rear spoilers.

You don’t buy a supercar for its versatility, but the NSX’s cramped 110-litre boot is disappointing all the same. The 911 is a more practical proposition, thanks to its larger load bay, 2+2 seating and excellent visibility. 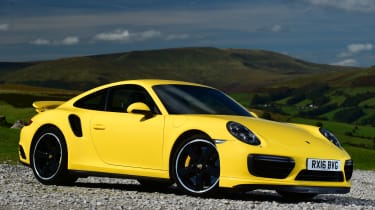 The 911 can’t match the NSX for visual impact, but in all other respects, it does just enough to beat the Honda. It’s every bit as quick in the real world, while the handling is even more agile and benefits from a welcome dose of involvement. The fact that it beats its hybrid rival for efficiency and undercuts it by nearly £20,000 is the icing on the cake. The Porsche really is the supercar for all occasions. 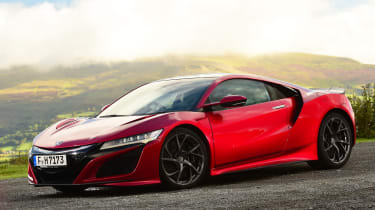 Make no mistake – the new NSX is an excellent supercar. Its hybrid drivetrain delivers devastating performance, while the daring looks give it unrivalled kerb appeal. However, the cabin lacks the practicality of the Porsche’s, while some of the omissions from the kit list are unforgivable at this price. Factor in the higher running costs and the Honda is just pushed to second place.

Evolution of a hero

How the NSX has developed from a 90s supercar upstart 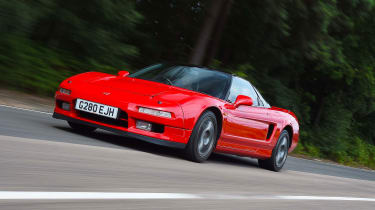 The NSX can trace its roots back to 1984, when Honda pulled the covers off its daring HP-X concept at that year’s Turin Motor Show.

The original production model arrived in 1990, and aimed to combine the performance and driving thrills of a Ferrari with the comfort and usability of Honda’s Civic family car. Yet despite its sublime handling and screaming VTEC engine, sales were slow, as buyers often opted for established models from Italy and Germany.

Even so, the NSX remained in production for 15 years, with later examples (above, left) being equipped with a larger 3.2-litre V6 and the option of a targa roof. There was also a much sought after, stripped-out NSX-R that featured more power and delivered an even sharper driving experience.

Porsche’s 911 Turbo has been around for even longer. The first 930 model hit showrooms way back in 1975, powered by a turbocharged version of the familiar 3.0-litre flat-six.

Over the years, the engine capacity grew to 3.6 litres, but it wasn’t until the 1995 993 generation that twin-turbocharging and four-wheel drive first appeared, setting the template for all subsequent 911 Turbos. 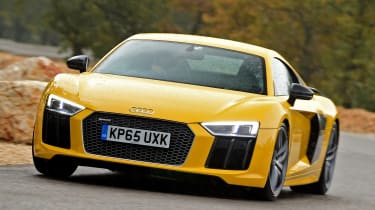 The jaw-dropping R8 matches the Honda for kerb appeal, while its glorious old-school V10 engine delivers crushing performance and a spine-tingling sound. However, it can’t match the efficiency of its rivals here, so running costs are huge. 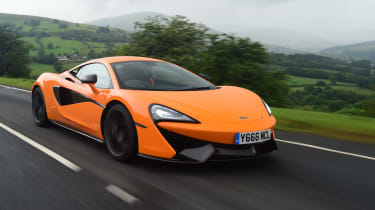