The new Audi R8 represents a big improvement in most areas over a car that was already very good indeed. It’s lighter, faster, stiffer and more powerful than ever before. Yet at the same time it’s also more efficient and more economical, featuring one of the best cabins of any sports car, at any price. Shame it isn’t a touch more analogue in its responses, especially in the way it steers with the new Dynamic steering system fitted. But then you can’t have everything, can you?

Lighter, stiffer, more powerful and faster than ever before, the new Audi R8 would appear – on paper at least – to be a much improved version of an already very good sports car.

Since its launch in 2007, the R8 has redefined what's possible in terms of dynamics and driver enjoyment while at the wheel of an Audi. Before the R8, fast Audis were always lacking somewhat in terms of emotion. In the eight years that have followed, however, Audis have got more exciting to drive across the board – the RS versions especially so. And this all-new R8 takes the game another big step in the right direction…

The headline advancements are many. The core chassis is stiffer and stronger thanks to its amalgam of carbon and aluminium. The four-wheel drive system is smarter and even more efficient, the engines produce more energy yet burn less fuel – despite the 5.2-litre block being fundamentally unchanged internally.

And then there's the new interior, complete with redesigned (and very excellent) digital dashboard featuring a new 12.3in TFT display. There’s a set of all-new seats, and an all-new Drive Select system, too. 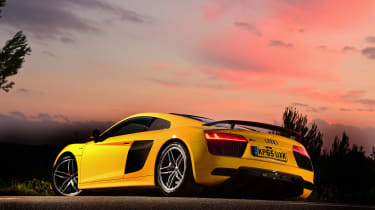 Even the headlight mechanisms have been reengineered to incorporate Audi's optional laser light technology, meaning you will no longer be the brightest spark on the road if you specify the R8's standard LED lights (which happen to work quite brilliantly anyway).

There is no V8 model this time round, Audi instead choosing to distinguish between the top and mid level versions by giving the V10 Plus more kit as standard inside, more power and torque, and more flexibility on the move thanks to its new Performance Mode.

So, not only is there Dynamic Drive on both models, in which you can switch between Comfort, Auto, Dynamic and Individual, but in the Plus model the driver can also select between Wet, Dry and Snow settings to tailor the mapping of the engine, transmission and stability control depending on how confident they are feeling, or what the conditions are like underfoot. 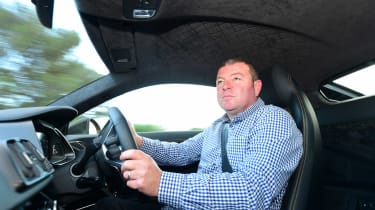 There’s even a button that opens up the exhaust system which, when in sport mode, produces the requisite crackles and bangs on the overrun. To begin with, this seems like another fantastic new R8 feature, but once you realise that it emits the exact same burst of crackles, every time you back away from the throttle, it does feel a touch digitised.

The steering is electro-hydraulic on both models, but you can also opt for a new variable ratio Dynamic rack for an additional £1,200, which quickens the response as more lock is applied. The car we drove had this equipped, and to be honest we wished we’d been able to try a new R8 with regular steering. Actually, the steering was just about the only aspect of the car that didn't quite hit the bullseye. 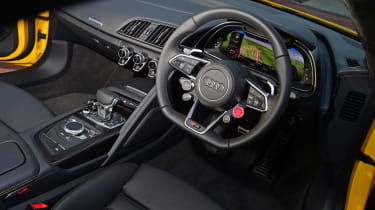 There is accuracy and precision by the bucketload to the R8’s new Dynamic steering, but little in the way of feel. So you trust that the front tyres are going to go where you aim them purely by using your eyes. Your hands and fingertips, on the other hand, receive far less information, and for a car as fast and focused as this, that has to go down as a minor disappointment.

Elsewhere, the new R8 is hard – if not impossible – to fault, even if it does lack the last tenth of raw excitement that other cars in this class now offer, most specifically the McLaren 570S. The engine is an absolute peach, a classic atmospheric V10 that revs all the way to 8,250rpm. It sounds delicious while doing so, and has an immediacy of response to its throttle that no turbocharged engine could ever replicate.

The seven-speed dual clutch gearbox also works quite brilliantly in conjunction with the V10 engine, delivering up or downshifts faster than you could ever manage manually, and with an increasing level of gusto depending on which drive mode you’ve selected.

And as for the handling, body control, grip and traction – the new R8 displays so much composure everywhere, wet or dry. In fact, it feels a lot like it’s on rails most of the time. On the road, its limits are way beyond what any sane driver would ever expect to reach. Which is either a very good thing if that’s what turns you on, or a touch beige if you want a bit more edge and excitement.