If it weren't for the Hyundai Coup�, the Korean firm's UK story would now be completely different. With its impressive chassis and occasionally controversial looks, the car has attracted much-needed attention to the line-up. 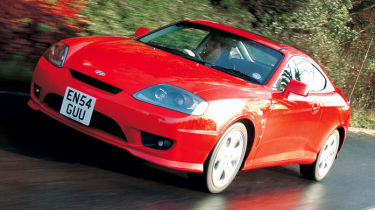 The real ace up the Coup�'s sleeve is value for money. You'll struggle to find another motor that mixes style, performance and kit at such a low price. What's more, the driving experience impresses, even if it can't quite match the car's good looks. The only letdown is the variable cabin quality.

If it weren't for the Hyundai Coup�, the Korean firm's UK story would now be completely different. With its impressive chassis and occasionally controversial looks, the car has attracted much-needed attention to the line-up. It's a strong seller, too, topping the maker's own charts, alongside the new Getz.

But the model that proved Hyundai could compete with the world's best is starting to show its age. It has now been around since 2001 - and in order to guarantee the two-door's popularity until it's replaced in 2007, the designers have given it the once over.

Considering the appeal of the car, it comes as no great surprise that the changes are reserved rather than radical - but they're still effective. The front loses the full-width air intake and now sports a meaner-looking vent.

Also new are the headlamps, along with the more sculpted front wings. And the overall result achieves the desired effect of giving the Coup� greater road presence, particularly when it appears in your rear view mirror.

The fresh look is completed by revised radiator 'gills' at the side, plus restyled wing mirrors and much cleaner rear light clusters. As a final touch, the 2.0 SE model we drove features the 17-inch alloys usually reserved for the top-of-the-range 2.7-litre variant.

So it's a disappointment to find that the tidy-up inside has been less effective. Brushed aluminium offers some quality, but there's cheap plastic in the centre console, while the cigar lighter and immobiliser light look as though they are both aftermarket products.

These features let down well considered detailing such as the red stitching on the black leather seats - which is a shame. Still, out on the road, it's easy to see why Hyundai expects the 2.0 SE to make up 50 per cent of sales.

The car's 2.0-litre engine, which was introduced last year, provides a decent compromise between the underpowered 1.6-litre and thirsty 2.7. There is plenty of muscle on tap, although to get the best from the unit you have to work it. But that's no chore because the five-speed gearbox is smooth and precise.

Around country lanes, the chassis has very little roll and plenty of grip. What lets the car down is the steering, which feels numb at speed. The only other niggle is the limited headroom. Drivers who are more than six feet tall will bump their heads on the roof, particularly if the optional sunroof is fitted.

However, there's still no doubting the model's appeal. At £16,795, the Hyundai remains one of the most competitively priced cars in its class. It looks as though the Coup� is set to hog the limelight for a little longer yet.