Life is full of risks. From ordering a new dish at your favourite restaurant, to sending your credit card details down the phoneline for an Internet purchase, modern living has made gamblers of us all. But while a bad meal decision will leave you with only a rumbling stomach, taking a wager on your car choice is something else altogether. 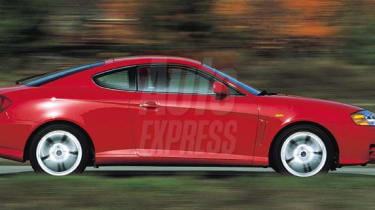 Life is full of risks. From ordering a new dish at your favourite restaurant, to sending your credit card details down the phoneline for an Internet purchase, modern living has made gamblers of us all. But while a bad meal decision will leave you with only a rumbling stomach, taking a wager on your car choice is something else altogether. Take the Hyundai Coupe, for example. Blowing the thick end of £20,000 on a sports car built by a budget firm involves a higher-than-average degree of risk. After all, there are safer options for your money - think Subaru Impreza WRX or Lotus Elise, both of which can be had for the same cash. We've recently bid farewell to our long-term Coupe after 12 months on the fleet: a year that has revealed the Hyundai to be a thoroughly decent package, if not quite perfect. First, its good points. The styling was a universal hit, with virtually every logbook entry commenting positively on those shapely lines. One or two even drew comparisons with the Ferrari 456; praise indeed. Then there was the motor, which won us over with its rich soundtrack and low-down punch. Hyundai may not be known for its engine-building skills, but the V6 left us with new-found respect for the Korean marque. The practicality was also decent for a coup�, with reasonable rear space and a cavernous boot thanks to fold-flat back seats. The standard luggage net was further evidence of Hyundai's attention to detail, and got used regularly. But for all its good points, the Hyundai's design flaws and reliability concerns will stick in the mind long after the fond memories have faded. For starters, the driver's seat was a no-go area for six-footers. Thanks to a high base and low roof-lining (made worse by the non-optional sunroof), tall drivers needed to wind the chair right back to fit in! Then there was the problematic drivetrain. The clutch had always been heavy, yet it wasn't until the whole car began to judder at low speeds that we realised something was amiss. But before we had a chance to book the car in for a check-up, the clutch gave out, leaving us stranded on the M4 just outside London. It then took three days for our local dealer to fix it and carry out an early 10,000-mile service. Although the clutch was replaced under warranty, the other repairs cost £206.62. The damage to our confidence, however, was harder to repair, especially as our past two long-term Hyundais - an Accent and an Atoz - had suffered gearbox and clutch problems. Simply bad luck? Let us know... The Coupe also attracted more than its share of misfortune. Only days before it was due to go back to the manufacturer, a shopper reversed into it as we were leaving a supermarket car park. Although the impact left an expensive-looking scrape along the rear bumper, a call to paintwork specialist ChipsAway (0800 028 7878) brought good news. Instead of us having to pay £600-plus for a new assembly, ChipsAway came to our London company car park and did an immaculate repair for £152.75. Given how many of our long-termers collect damage from the capital's growing band of touch-parkers, we'll certainly be using the firm again. So would we recommend a Hyundai Coupe over a more established rival? Well, when it worked, it was a great machine. The driving experience was rewarding, while the engine was a gem. Had we not suffered clutch problems and been stuck gearless on the hard shoulder, we'd have endorsed it without reservation. If Hyundai can iron out the flaws that affected our example, the firm could be on to a real winner.