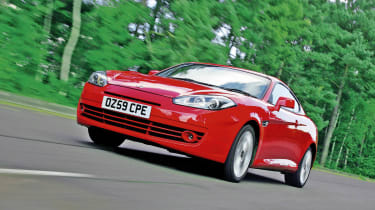 At its original list price, the Coupé SIII made little sense – there are plenty of hot hatches for similar money that can run rings around it. However, the £5k price cut puts it in a different league with no direct rivals. If you want a sharp looking sports car loaded with kit for the cost of a mundane supermini, nothing comes close.

It’s the credit crunch coupé! Hyundai is currently riding the crest of a sales wave, thanks to the Scrappage Incentive Scheme. Its range of small cars has proven popular with buyers, thanks to their mix of great value and decent kit.

But what about drivers on the hunt for sporting thrills on a budget? Well, there’s the Coupé SIII, which has a huge £5,000 knocked off its list price.

What’s more, you don’t need to trade in an old banger to take advantage of the cut. The range now starts from £12,995 – that’s £2,600 less than when the Coupé was introduced in 1996! – which places it firmly in supermini territory.

So what do you get for your money? Well, it looks sharp, with a low-slung profile and smart 17-inch alloys, although that sporty shape does limit cabin space. There’s plenty of standard kit, though, including air-con, heated leather seats, cruise control, an electric sunroof and iPod connection. Blue backlighting adds a classy touch, but the hard plastic finish and aftermarket stereo are a bit of a letdown.

Under the bonnet is a 141bhp 2.0-litre engine that gives the Coupé a 0-62mph time of 9.3 seconds. Performance isn’t particularly impressive; you need to work the motor and five-speed box hard to make progress, and the Coupé’s buzzy engine lacks refinement at motorway speeds.

Things improve on twisty roads, though. The handling isn’t the sharpest around and the steering is rather numb, but it’s still entertaining, and the stiff suspension means there’s minimal body roll in corners. If you’re in the market for a budget coupé, then the Hyundai genuinely is the last of the breed. And it, too, will soon disappear, as production in Korea has already finished.

Rival: MG TF 135 The TF matches the Hyundai for value with a £13,511 price tag, but the basic design is 15 years old and it lags behind for standard kit and dynamics. Only the prospect of top-down motoring could win it fans.