The Hyundai promises much but fails to deliver. It’s not a well-rounded car. 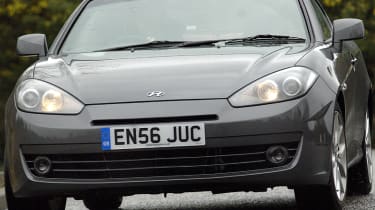 Driving The Coupe comes with a choice of three engines – 1.6-litre, 2.0-litre and a 2.7-litre V6. As even the range-topper is a bargain, that's the version we tested. It comes to life with a pleasing note, and feels urgent at low speeds. Sadly, that’s where the good news ends. It’s not so much the engine as the antiquated (optional) four-speed automatic gearbox – it saps the unit’s power and puts an end to any notions of meaningful pace. From a standstill, it isn’t too bad, but once on the move you have to force it to kickdown, and the result is not smooth. The engine itself is more refined, but becomes noisy under hard acceleration, and the 162bhp it musters is disappointing. We’d probably choose the cheaper 2.0-litre; though this is gruffer still, it’s not that much slower. It’s certainly better than the lethargic 1.6, which is as big a contrast to the sporty body as you could imagine. Out on the road, the Coupe is happier cruising than being thrown around country lanes, but it suffers from tyre road and wind noise from around the tailgate. It’s not great around town, either – potholes and uneven roads cause the suspension to jar badly. And while the steering is well weighted, it’s short on feel. The harder you push, the more the Coupes’ flaws come to light. It isn’t that stable, feels vague when first turning into a corner; generally, after the way it looks, the sporty Hyundai’s drive is a disappointment.

Marketplace Despite being launched back in 2002, the Hyundai Coupe still looks great. In its third incarnation (hence the ‘III’ badging), the Korean car maintains the sleek and sporty profile that has made it so popular. Penned by in-house designers, the distinctive shape has been kept up to date by a facelift which introduced a new front end, grille and headlights. The side vents of the old car were also replaced by a smaller unit incorporating the side indicator repeater – it looks less fussy, but the loss of this sporty detail is a shame. In terms of rivals, the Hyundai doesn’t have many, as one-time direct competitors like the Ford Puma and Toyota Celica are no more. Alternatives come instead from hot hatchbacks such as the SEAT Leon FR and Ford Focus ST, as well as coupe-convertibles like the Vauxhall Astra TwinTop and Peugeot 207 CC.

Owning In morphing into SIII guise, changes were made to the interior, too. The centre console was redesigned and more logically laid out, with a smart, metal-effect finish. It’s let down by the cheap stereo, although we like the blue illumination for the dials – even if the colour isn’t consistent across the different controls, and despite cheap-looking auxiliary dials on the centre console. An MP3 connector in the centre arm rest is included as standard on all models; a more useful feature. Unfortunately, the driving position is far from perfect, and tall drivers in particular will struggle. While the seats look good and are comfortable, the low roof means headroom is at a premium. As a result, you sit in a low-slung position. The seat has minimal vertical adjustment, and that leaves the steering wheel – which doesn’t offer reach movement – too far away. Rear space isn’t bad for a coupe and the boot is big, too, especially with the seats folded. But the Hyundai can’t compete with more practical hatchback rivals. The V6 engine is extremely thirsty too, particularly when mated to the automatic transmission, while it retains over 4% less of its list price than the more humble 1.6-litre. It’s not even that cheap to service. 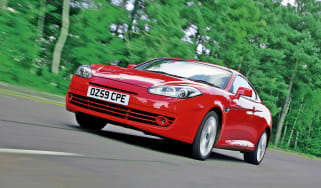 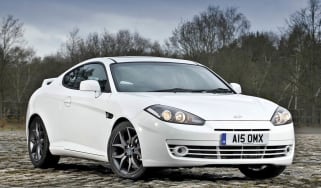 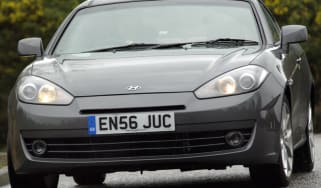 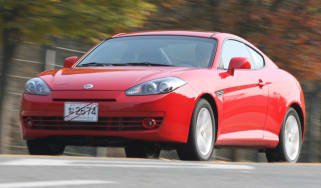 Say what you like about the Hyundai Coupé, but you can’t argue with its staying power!
Hyundai Coupe 2.0 SE 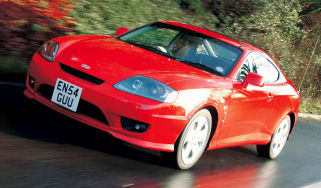 If it weren't for the Hyundai Coup�, the Korean firm's UK story would now be completely different. With its impressive chassis and occasionally contro…
Hyundai Coupe 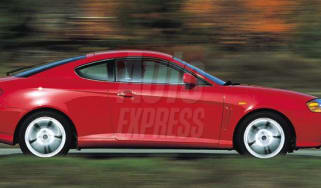 Life is full of risks. From ordering a new dish at your favourite restaurant, to sending your credit card details down the phoneline for an Internet p…
Hyundai Coupe 2002 review 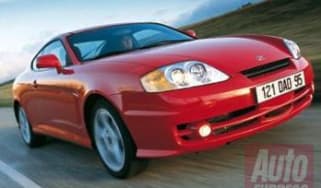 Amid the bright lights and glamour of Cannes, Hyundai raised the curtain on its most important new model for years
Skip to HeaderSkip to Content