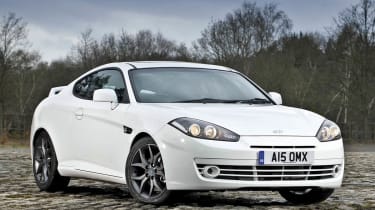 If looks alone sold cars, then this TSIII Coupé would be a winner. But at nearly £20,000, it’s battling against some of Europe’s best hot hatches – and it falls way short. As a quirky choice with plenty of kerb appeal, a base-spec 1.6-litre model might be tempting, but in TSIII form it’s simply too expensive and too far behind the pack.

Like the i-Mode, Hyundai’s Coupé is also something of a head-turner. When the first- generation car hit the market in 1996, some even called it the ‘Korean Ferrari’!

This is the third generation of the firm’s most desirable model, and it looks better than ever – particularly in the limited-edition TSIII guise you see here. This comes in either white or red and adds anthracite alloys, a larger rear spoiler and quad exhaust pipes. Inside, quilted leather sports seats provide a touch of class.

But the updates are purely cosmetic. The only engine choice is the 141bhp 2.0-litre unit from the standard line-up, which is slow, gruff and at odds with the coupe’s sporty pretensions. At higher revs, the four-cylinder powerplant fills the cabin witha strained, unpleasant noise.

This clash between styling and performance tells you everything you need to know about Hyundai’s two-door. The seats, for example, look great, but they’re set too high and the driving position is poor, with no reach adjustment for the steering wheel, and a distinct lack of headroom for anyone over six foot tall.

Similarly, the steering itself initially flatters to deceive with a nice, heavy turn-in. However, it quickly becomes apparent it’s artificially over-weighted to compensate for lack of feel. Other niggles include a fiddly stereo. The whole cabin, though neat and well screwed together, seems 10 years out of date.

On the plus side, the TSIII rides well most of the time – although it doesn’t deal with potholes very gracefully – and the five-speed box springs through gears with assuredness. The VW-like blue instrument backlighting is pretty, too.

But at £19,705, the Coupé is in hot hatch territory, battling with the Honda Civic Type R and VW Golf GTI – cars with the bite to match their bark.