Say what you like about the Hyundai Coupé, but you can’t argue with its staying power! 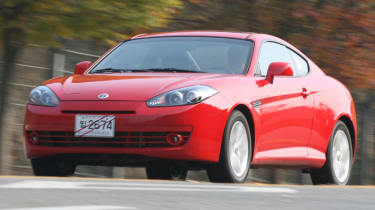 Hyundai has pretty much cornered the market with its Coupé. Even the range-topping V6 model costs less than £19,000, so no rival comes close in terms of value. And this restyled version offers more of the same. The tweaks really sharpen up the car’s looks, and although the interior updates aren’t quite as successful, generous kit and a fun driving experience mean it’s an excellent package.

While most mainstream cars – particularly Far Eastern models – are replaced every five years, the sporty two-door keeps going, with an endless stream of facelifts.

On sale since 2000, its combination of distinctive styling, fun dynamics and a sub-£15,000 starting price mean it has been one of Hyundai’s best-selling models. So rather than produce a successor, the maker has given the third-generation Coupé its second reskin.

It goes on sale in the UK in January, and the newcomer has been tweaked inside and out. But Hyundai has deci­ded not to mess too much with the rest of a tested for­mula. So the engine line-up – with 1.6 and 2.0-litre four-cylinder and 2.7-litre V6 petrols – and chassis settings remain the same. Mind you, there is likely to be a slight price increase.

So, have the visual updates been a success? The designers at Hyundai have sharpened the nose and tail with some neat touches, while keeping the familiar rakish shape of the car.

Out go the current Coupé’s large air intakes and in comes a subtle lower grille with horizontal bars incorporating integrated spotlights. New slender headlamps, which extend up the re-profiled bonnet, and a small central vent complete the redesigned face. At the back, things have been tidied up with revised tail-lamps and purposeful exhaust pipes, while the radio aerial is now built into the rear screen.

The exterior changes have resulted in a classier look, while the cheap interior plastics and poor finish that have let the Coupé down in the past have also gone – this revised version gets new metal trim and chrome air vents. But while it’s certainly better than before, it still falls behind European rivals. The driving experience is great, however. The version we drove was powered by the 141bhp 2.0-litre engine, and even though it was hooked up to a rather ponderous four-speed automatic box – most UK models will get a five-ratio manual instead – it still gives sprightly performance, with the 0-60mph sprint taking around nine seconds.

On twisty roads, the chassis shows exactly why the Coupé has such a loyal following. The suspension is firm, body roll is minimal and there is plenty of grip. The steering could do with more feedback and a lack of headroom will be an issue for tall drivers, but the two-door is still a lot of fun.

Factor in a five-year warranty, and it’s clear that the Coupé’s place in Hyundai’s line-up looks assured for a few years yet.