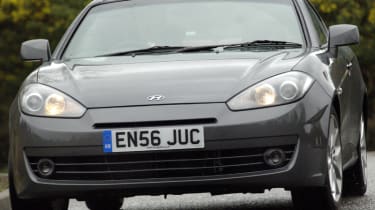 Hyundai’s newcomer is one of the last compact coupés – but its platform is now showing its age. Performance is reasonable and you get lots of kit for your money, yet a number of modern and seriously swift high-performance three-doors are available for a similar amount. While it’s the only competitively priced coupé about, the SIII now feels old-fashioned.

Buying a new Coupe for less than £20,000 is not as easy as you might think. With Toyota's Celica consigned to the history books and the likes of the Ford Cougar long gone, Hyundai's Coupe is one of the few remaining 'budget' sports cars available.

But does that simply make it one of a kind - or a dinosaur fighting extinction? To provide its sleek three-door with a new lease of life, Hyundai has given the Coupe a full makeover.

Badged the Coupe SIII, the newcomer is the third incarnation of the car, and has recently arrived in the UK. We've already tried a Korean model in Issue 937, but in Britain, the Hyundai's styling will be an acquired taste.

Hailed as a Ferrari lookalike when it was first unveiled in 2000, the model was then refreshed in 2005. But the latest changes represent the most sig-nificant of all, as the Coupe now features new angular headlamps. A letter-box grille also gives the nose a more aggressive appearance, while the rear has been generally tidied up with new tail-lights and a reshaped bumper.

Inside, the upgrades are equally extensive, with the firm updating the cabin to give it a more modern feel. Santa Fe-style blue dials have been added, and build quality appears excellent. Our biggest complaint concerns the steering wheel, which adjusts for rake only, while we found that the headroom on offer is also very limited.

With engines carried over from the outgoing Coupe, mechanical modifications are relatively limited. Entry-level models now get a 103bhp 1.6-litre powerplant, mid-range variants come with a 141bhp 2.0-litre, while the range-topper doesn't change, and retains its 162bhp 2.7-litre V6.

Our model was equipped with the 2.0-litre. Although it's not particularly characterful, this motor provides decent acceleration from low speeds, but it's not exactly a top performer.

Mated to a snappy five-speed man-ual gearbox, the four-cylinder engine takes the Coupe from 0-60mph in 9.3 seconds, with a top speed of 129mph in reserve. The biggest problem with the powertrain is actually engaging gears - the clutch has a high biting point and an awkward pedal, taking all the fun out of changing ratios. At higher revs, the engine also becomes strained and breathless.

On the road, the Coupe's chassis soon shows its age, too. While the compact dimensions and low-slung seating position make the Hyundai seem nimble, the SIII can't change direction with the same agility you'd expect from a modern hot hatch.

And the steering feels numb when compared with cutting-edge rivals.However, few buyers will have any complaints about their Korean car's list of standard equipment. If you opt for our 2.0-litre model, you'll get the full leather trim, climate and cruise control and 17-inch alloy wheels all thrown in. This version is priced at £17,995, while entry-level examples cost £15,745, with V6 variants available from £19,495.

Even though there are very few Coupes available for this money, you have to ask what the Hyundai can offer that similarly priced hot hatches can't. The likes of Renaultsport's Clio 197, the forthcoming Vauxhall Corsa VXR and even Volkswagen's Golf GTI all provide stronger performance, better practicality and a far more modern package at SIII prices.

So although Hyundai now has the budget Coupe class all to itself, we reckon most buyers will be better off spending their money in the blooming hot hatch market instead.