Amid the bright lights and glamour of Cannes, Hyundai raised the curtain on its most important new model for years 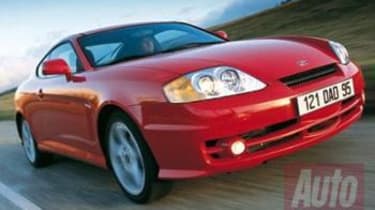 Amid the bright lights and glamour of Cannes - home to Europe's most prestigious film festival - Hyundai raised the curtain on its most important new model for years: the long-awaited sequel to the Coupe.

Until now we've had to make do with spyshots and a sneak preview at the Frankfurt Motor Show to satisfy our curiosity. But the next-generation Coupe's dramatic premiere in the south of France this week finally marked an end to the waiting and speculation.

The Korean-built machine is ready to roll - and Auto Express was on hand to put it through its paces and decide whether it's destined for greatness, or yet another box-office flop... When the original Coupe - penned by the firm's Los Angeles design studio - arrived in 1996, its curvaceous styling made it an instant hit with UK buyers. But last year's in-house facelift was less than warmly received, so this time the Korean firm left nothing to chance and handed responsibility for the newcomer's design back to LA.

Judging by the admiring looks the new Hyundai received in Cannes, more than a hint of Hollywood magic has rubbed off on the car's sinewy body. With its sculpted flanks, muscular haunches and curved roofline it bears a striking resemblance to Ferrari's flagship 456GT, while the long bonnet, wraparound headlamps and wedge-shaped snout give the Coupe a Ford Mustang-like air of aggression at the front.

Other highlights include striking air vents behind the front wheelarches, the aircraft-style fuel-filler cap and twin exhaust pipes poking from each side of the rear valance. In addition to the standard spec of our left-hand-drive test car, UK models are likely to get an integrated boot spoiler.

While early spyshots gave us clues about the Coupe's exterior styling, we were totally unprepared for what awaited us inside - a cabin design which surpasses those of many European rivals not only in terms of sophistication, but in quality, too.

The circular air vents and chunky heater controls are in keeping with current design trends, while the chrome-ringed dials and metal-finished centre console have a definite Mondeo feel about them. Mounted on the console are three additional gauges: one displaying torque - aimed at the Gran Turismo-obsessed PlayStation generation - the others indicating fuel consumption and voltage. If Hyundai can replicate this level of quality in its forthcoming Fiesta rival, the TB, then it could be about to shrug off its budget-brand image for good. But the newcomer isn't only better built, it's better packaged, too. The longer wheel- base has freed up more front legroom, and the driver is treated to a superbly low-slung seating position behind the height-adjustable wheel.

And those sculpted seats are every bit as good as they look, although the ambience is spoiled somewhat by the gearlever, which has the appearance of a plumber's tool and is set too far back for comfort. That Ferrari-esque roofline means anyone taller than 4ft is unlikely to want to sit in the rear, relegating the Korean two-door's back seats to the role of mobile creche. But the large boot and impressive visibility through the rear window make it more than a match for rivals such as the Toyota Celica and Vauxhall Astra Coupe in terms of practicality.

With a choice of three different engines and transmissions, the line-up is designed to appeal to a broad range of buyers. Entry-level cars will be powered by a reworked version of the outgoing model's 105bhp 1.6-litre motor mated to the existing five-speed gearbox. More performance-orientated drivers are expected to opt for the revised 2.0-litre version, which uses the same five-speed unit but offers a more robust 137bhp and a 0-60mph time of nine seconds.

The pick of the bunch, though, is the flagship 2.7-litre V6. This engine already features in the firm's Santa Fe off-roader, but its sparkling potential is only truly unleashed in the new Coupe. With a mere 1,333kg to haul around and the extra flexibility afforded by the new six-speed manual box, the 171bhp unit offers genuine hot-hatch performance, pumping out 245Nm of torque at 4,000rpm and reaching 60mph from a standstill in around eight seconds.

Getting there is a pleasure, too; the engine's ultra-smooth throttle response, muscular top-end power delivery and muted growl provide plenty of entertainment as you delve into the Coupe's 136mph potential. The gears aren't particularly closely spaced, but the shift action is direct and positive and the long-legged sixth ratio makes for executive car-rivalling refinement at 70mph. Precious little wind or road noise filters inside the cabin, even when riding on the optional 17-inch alloy wheels fitted to the car we drove. And if you want more comfort and convenience, there's also the option of the Santa Fe's four-speed automatic gearbox.

The basis for the Coupe is actually a modified version of the Elantra's front-wheel-drive chassis. However, extensive tuning by the Korean manufacturer's Frankfurt research and development centre has given the two-door machine a much more finely honed ride and handling balance. At low speed the Hyundai feels quite stiff, transmitting surface imperfections through the seat of the pants. But up the pace and the suspension takes on a fluidity bettered only by the sublimely supple Celica. The chassis shrugs off mid-corner camber changes and bumps, giving a great feel of security and stability.

As with its predecessor, the Oriental machine features a superbly direct steering system. This instinctively homes in on the apex and then settles rapidly into its chosen line in bends, allowing you to accelerate early and make the most of the car's natural grip and stability. A traction-control system will also be available to aid wet handling.

Safety was a big consideration during the car's development, and the Coupe's strong anti-lock brakes and front and side airbags helped it attain a reasonable three stars in recent Euro NCAP crash tests. Where the 2+2 really scores points, though, is in terms of value. At an expected price of around